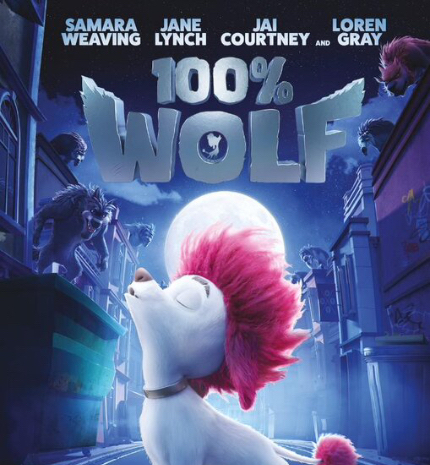 An animated Australian feature about werewolves? Sure! ... What? It's meant for children and other people who are much younger than me?

Before I watched 100% Wolf, I was besotted by the title, which I didn't realize was taken from the novel it was adapted from, written by Jayne Lyons and first published in 2009. Nor did I realize that the film was released in a number of countries around the world (including the U.S., where I live) throughout the past year.

The premise sounded appealing, in any event: Freddy Lupin loses his beloved father Flasheart (Jai Courtney) while a child, yet is buoyed by the thought that he will grow into a ferocious werewolf upon reaching adulthood and assume his rightful place as leader of the pack. It's his destiny, after all.

Poor Freddy (voiced as an adult by Ilai Swindells). Upon reaching adulthood, he watches all the other members of the pack transform from human into werewolf under a bright spotlight during a special ceremony, whereupon he steps into the moonlight and transforms ... into a poodle! Gah!

Horrified and humiliated, Freddy is further shamed by his cousins, who promptly spirit him away and dunk him into a tub, dying him purple and securing a silver collar upon his neck, which will keep him even from transforming back into a human, all so that his dastardly uncle Hotspur (Rupert Degas) can grab leadership of the pack. With faint echoes of The Lion King reverberating, Freddy is banished to the streets, where a fateful meeting with a stray dog named Batty (Samara Weaving) convinces him to make an effort to regain his rightful place with the wolf pack. His efforts eventually include Foxwell Cripp (Rhys Darby), a human who turns from enemy into ally.

Directed by animation veteran Alexs Stadermann, 100% Wolf is very, very cute and cuddly, and mostly not threatening at all, eliciting more than a few chuckles on my part (a jaded adult with no children) and even several guffaws. The animation is 2D and top-notch, so I enjoyed watching the movie. It appears to be geared more for adults who want to expose their children to non-threatening werewolves, which, frankly, is a novel idea, but I suppose vampires, witches, zombies and other supernatural creatures must have their own kid-friendly versions, so why not werewolves?

Still, I hope no one makes a kid-friendly series about politicians. That would really be monstrous.

Do you feel this content is inappropriate or infringes upon your rights? Click here to report it, or see our DMCA policy.
animationAustraliaIlai SwindellsJai CourtneyRhys DarbySamara Weaving