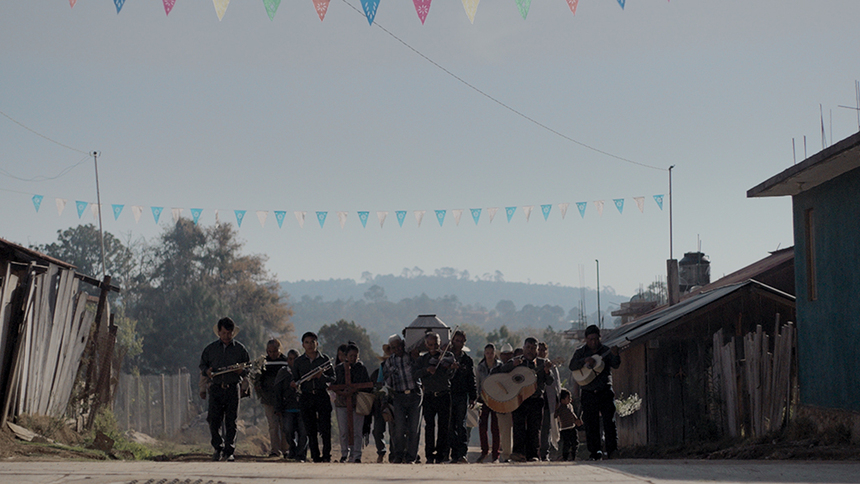 Too often we think of small towns are being insular, everyone in everyone's business, with little activity, and most of all, dull, populated by people whose lives are equally small. And while it may be true that in small towns, everyone does know what everyone else is up to, those who populated these places are no less complicated, and their lives no less filled with drama than others.

In Ángeles Cruz' feature debut Nudo Mixteco, three lives intersect over the town of San Mateo's celebratory weekend. Each is wrapped in their own troubles (each of which seem to be an open secret in the town), but as their paths cross, there is a common ground between the women who are constantly fighting age-old patriarchal power and prejudice, even if their private battles are unique and a constant struggle.

The first arrival back in the town is María (Sonia Couoh); now living in the city as a housekeeper, she has returned upon the death of her mother. While María wants to mourn properly, her father rejects her, blaming María for her mother's death. It seems they, and possibly the town, are well aware that María is a lesbian. Rather than hide it, she chose to leave. And now, in her grief, she wants her childhood love Piedad (Eileen Yañez) to come back to the city with her.

Next comes Esteban, back from three years working in the north. All is not well in his house; his children barely remember him, and his wife has effectively left him for another man. Even his mother tells him he was gone too long, but Esteban will have none of it. He calls on the town council, who it seems has some oversight on these matters; the town will decided who is to blame for the situation and who has to pay the price.

Toña (Myriam Bravo) also left the town because of trauma, but hers might be about to repeat itself; she is called back by her daughter, whom she left in the care of her mother and uncle. It seems the uncle might have begun to abuse his great-niece, and Toña must battle to get her daughter away, against a mother who willfully turns a blind eye.

San Meteo might seem at first glance to be a stereotypical Mexican village, with dusty streets, whitewashed houses, and cultural than leans towards family life. But Cruz shows us the town first as surrounded by hills that suggest entrapment. The hot sun and slightly out-of-tune music in the town square further suggest San Mateo is a place out of time, and not in a good way. Despite modern technology, it's clear too many people's attitudes are stuck in the past, leaving the women especially adrift and alone.

For Esteban, his return is no less tumultuous, but he does not receive much satisfaction from it. He fully expects to welcomed back as the returning hero; but as his mother tells him, three years was too long. His anger leads him to call a town meeting. Everyone meets in the square and proceeds, in front of Estaban, his estranged wife Chabela, and her new lover, to decide their fate. Esteban had to travel north to earn money, and sent it back, didn't he? Maybe; but he also said he'd be gone only a year, and never once wrote a letter to Chabela. Esteban is still unsatisfied with the outcome, which inevitable leads to feelings of possession and violence, and an ending that is expected but no less sad.

Toña's story is the most anxious; her life in the city is not glamorous, and perhaps she's traded one difficult relationship with a man for another (to put it mildly), but at least she's in control. But when she discovers that her trust in her mother, for care of her daughter, was misplaced, it's hard not to feel angry. Bravo does a great job of keeping that rage summering just below the skin, knowing she has to get her daughter back, but not knowing, at least at first, how far she can push. And push she can and will, not only with angry, but steadiness that belies the traumatic memories than haunt her daily.

At the end, San Mateo becomes a memory for those who need to leave it behind; is it still stuck in its ways, or will the actions of María, Esteban, and Toña have a ripple effect necessary to improve the lives of its citizens? Cruz doesn't fully answer the question, leaving the town, and its citizens, to contemplate the events of the fateful weekend. Nudo Mixteco is, indeed, a look at a small Mexican town that shows its dark and nasty side, that which might need to be swept clean in order to move forward.

Do you feel this content is inappropriate or infringes upon your rights? Click here to report it, or see our DMCA policy.
Miami Film FestivalÁngeles CruzNoé HernándezAida LópezSonia CouohEileen YañezDrama