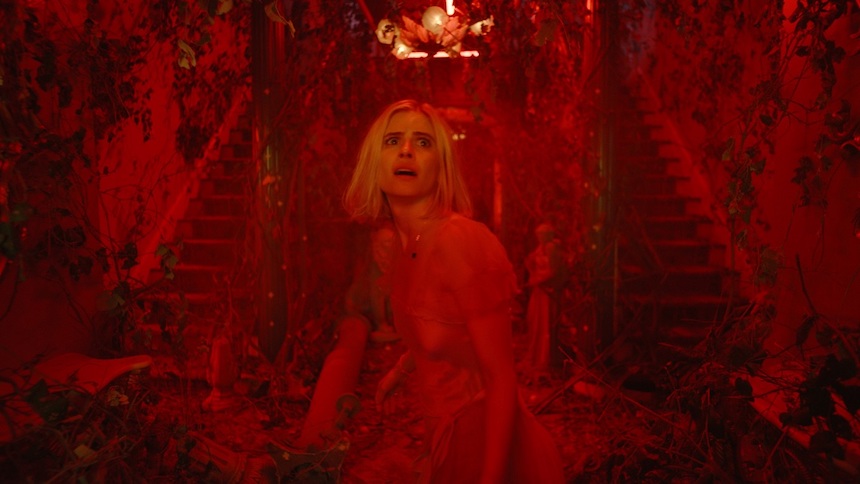 The Blazing World, writer-director-actor Carlson Young’s visually arresting, occasionally infuriating feature-length debut, embraces a dizzyingly vast array of cinematic and literary influences (everything from David Lynch to Guillermo del Toro, Richard Kelly, Tarsem Singh, and back again to David Lynch and 17th-century, proto-science-fiction writer Margaret Cavendish, the stated inspiration for Young’s film and its attention-grabbing title), but never manages to transcend the sum of those influences to stand or fall on its own.

Even as damning as that critique might sound, it does little to diminish the sheer scope of Young’s ambition, ambition that should be welcomed in new or veteran filmmakers, or the self-confidence in her abilities or her willingness to fearlessly jump headfirst into symbolic subject matter and material of the neo-Freudian/neo-Jungian kind.

Carlson’s character, Margaret Winter, a wan, humorless, listless twenty-something obsessed with pseudo-mysticism and faux-spirituality, the apparent blowback from the long-ago death of her twin sister, gets the proverbial call to (in)action, not from a magical, light sword-wielding wizard dropping out of a skylight offering a chance at interstellar or inter-dimensional adventure, but from a literal phone call from her narcissistic mother, Alice (Vinessa Shaw), requesting Margaret’s presence at the family home-estate as Alice and Margaret’s rage-filled, alcoholic father, Tom (Dermot Mulroney), packs up their belongings for a new, still unspecified home elsewhere. (Why Alice and Tom remain together and virtually unchanged physically and temperamentally may be less a mystery than a sign of Young’s inability to see relationships as mutable, contradictory, or complex.) It’s a classic triggering device, meant to force Margaret into the long-delayed healing process that’s left her emotionally stunted and incapable of emotional attachment to anyone except her equally unstable parents.

The creepily tanned, older anti-father figure standing near an inter-dimensional portal played by cult favorite Udo Kier doesn’t help the state of Margaret’s fragile, deteriorating mind either, but to Margaret, he represents more than just an imaginary event inextricably connected to an actual, traumatic, life-defining one, the death of her twin sister by drowning as Margaret’s attention shifted to a vociferous argument between her ever-battling parents. It’s a mystery that haunts Margaret, a mystery that Margaret, after returning home from a bizarrely off-kilter night with a sometime friend and ex-lover, can only resolve by taking the shallowest of shallow deep-dives into her own psyche, her own subconscious while Udo Kier’s handwaving, inter-dimensional stranger waits on the other side.

Kier’s rambling trickster character convinces an easily persuadable Margaret that she can somehow save her long-lost, long-gone sister from Death by going on a videogame-like journey to retrieve four keys that will unlock the door between the living and dead worlds. Limited by an arbitrary deadline, Margaret, like her onetime Lewis Carroll predecessor, Alice, through various, if not quite varied, fantastical settings, including one environment where a duplicitous, masked demon resembling her desperately needy, attention-starved mother waits for unsuspecting visitors like Margaret in a sand-filled house at the desert's edge or another semi-familiar space where a demon wearing her father’s torn, mangled face awaits a hesitant, off-balance Margaret, blocking her attempt to retrieve another key and resolve another element of her traumatic childhood experience.

Apart from Cavendish’s writings, Young and her co-writer, Pierce Brown, borrow heavily from cinematic history, recreating the expressionistically oblique sets of The Cabinet of Dr. Caligari through the more recent Gothic stylings of Pan’s Labyrinth, rarely, however, moving beyond mere mimicry or simple imitation. Still, credit to Young for her uniformly excellent taste in cinema and literary history, production designer Rodney Becker for bringing Young’s vision (however cramped and limited it might be here) to reel life, and veteran cinematographer Shane F. Kelly, doing his level best to craft indelible imagery to match Margaret’s inner and outer journey on a minimal, indie budget. It’s a pity, though, that so much time, labor, and effort has led to such an underwhelming, derivative, ultimately inert result.

More about The Blazing World