Trailer for THE WANTING MARE, Dark and Golden Futuristic Fable of Love and Horses 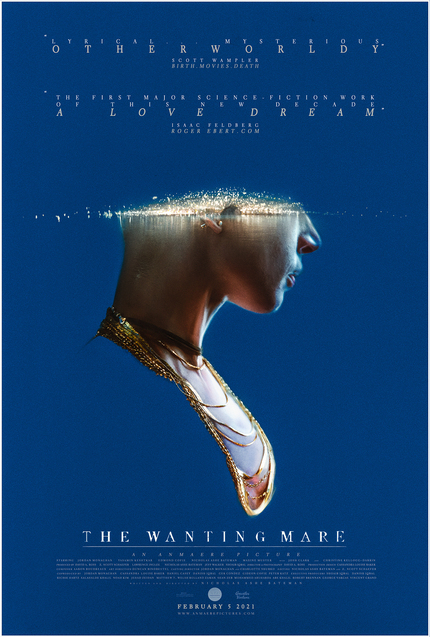 One of the great things about attending small film festivals (either in person or online) is the chance to see films that often get missed at the big ones; films that employ both the epic and the intimate; that utilize their budgets and devote their time to build grand worlds and yet still tell human stories.

One such film is The Wanting Mare, a fantastical film that played the festival circuit last year (I reviewed it out of Chattanooga). Its elegant combinatiom of fantasy and science fiction serve as the backdrop to a story of love and loss across three generations of women who live lives of isolation, trauma, and hope.

In the world of Anmaere, north of the city of Whithren, wild horses run through the moorlands and up the coast. These horses are the city's most valuable export and for those in Whithren, this trade passage creates lucrative and exciting possibilities: the chance to escape their constantly sweltering city and escape to the Western continent of Levithen, or simply to begin again. Meanwhile, the newest in a line of women who dream the same dream every night of a world long gone, meets a strange man, who will alter the course of her life, and the daughters and granddaughters that come after her.

Made over the course of five years, mostly in a warehouse and with hundreds of complex visual effects, The Wanting Mare uses its gorgeous production design and score to enhance its complex fable and characters. It's a tale which has stayed with me in the months since I first saw it, wishing to once again be bathed in its dark and golden light, revisit its haunting characters, and the world they inhabit. A new trailer has been released, along with some amazing production still, all of which can be viewed below.

The Wanting Mare will be released by Gravitas Ventures in US cinemas and VOD on Friday, February 5th, and will be accompanied by a half-hour making-of documentary, available online.

More about The Wanting Mare