Review: Modern-Day Snow White and the Selfie-Movie IN THE MIRROR 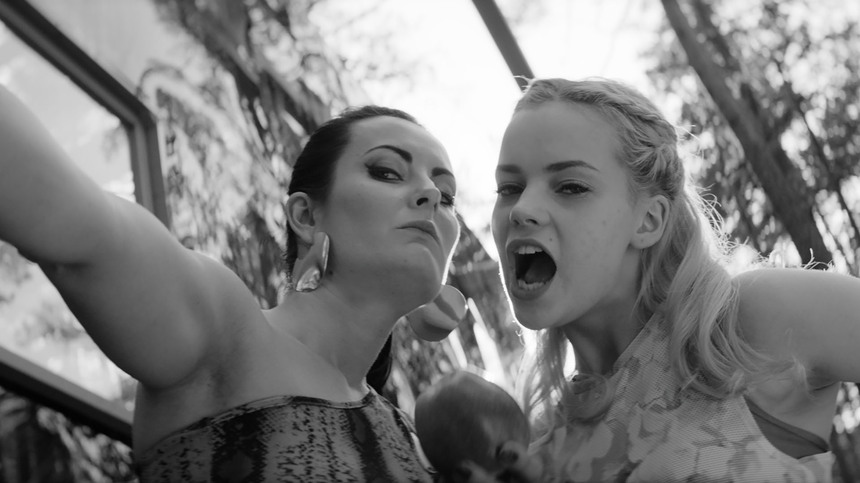 Folklore and fairy-tales have served as narrative fodder for centuries, if not aeons. Universally understood and timeless, countless iterations of archetypical and paradigmatic stories migrate perpetually through time, territories, and mediums. Esteemed Latvian director Laila Pakalniņa loosely adapts and reimagines the tale of Snow White in her latest project, In the Mirror, with an intriguing formalistic bent.

Pakalniņa transposes the story into the present narcissistic times of obsessive and superfluously worshipped cult of the body. In the director´s unique take, Snow White´s father and the step-mother are running a CrossFit center, sweaty work-outs and beefed-up bodies being their living and daily business.

The inevitable conflict fueled by jealousy arises between the acrobatic daughter and performance-obsessed egotistical stepmother. What drives the wedge between the two is not the stepmother´s notorious vanity, although the inferiority complex fuels the antagonism. The step-mother´s sociopathic plotting is driven by her rage that the young one manages to beat her in a burpee competition.

Twists and turns bring Snow White into a glasshouse of the Seven Guys, a group of restless sportsmen and athletes. The storyline follows the general trajectory as the step-mother carries out a series of homicide attempts, while Snow White happens to be always revived through odd acts of salvation. Her father, meanwhile, joins sailors in a grief-suppressing digression.

Despite the core story about premeditated child murder, In the Mirror keeps a swift pace, light mood, and gags rolling. What sets Pakalniņa´s version aside from the more conventional adaptation is the cinematography and staging. Both fittingly match the form to the story´s substance based on the central motifs of narcissism and self-obsession. However, the unique cinematographic spin would be much harder to pull off in a feature-length format without prior experiences.

Pakalniņa´s previous project was a documentary about the manufacturing process of a small plastic spoon titled simply Spoon. It takes a significant skillset to keep the audience´s attention sharply focused on a rather banal subject of how a tiny piece of plastic comes into creation. And it takes an even greater skillset to deliver the result that the audience would find engrossing and captivating.

In the Mirror is shot entirely as a selfie-movie, a feature-length film consisting solely out of a patchwork of selfie-messages. Characters film themselves as if creating missives for their social media channels or one-way facetime-like communication. Hardly a novelty or avant-garde approach in a world where such communication has been already established as a norm, though Pakalniņa experiments with the stylization with surprising results.

In the beginning, the form feels a bit gimmicky and the illusion of a plot unfolding in real-time does not sufficiently sustain to ease the suspension of disbelief. Due to the nature of characters breaking the fourth wall constantly, the narration is all about telling and little about showing regarding the major plot points.

The director transposes the "talking head" convention of docu-making into fiction filmmaking and creates a para-documentary vibe through a string of self-contained testimonies, long-take episodes. Pakalniņa very much conscious of the striking imbalance between telling and showing however a finds a way to update the form. While the main concept of narration is lifted from docu-making, the approach to spice up the big screen experience and overcome the constraints of selfie-acting comes from the practice of single-shot films.

Pakalniņa and her cinematographer Gints Berzins (of Spoon among other endeavors) stage and frame carefully each scene (episode) paying major attention to happenings in the background. The film´s second and third plane is the space where much of the action is meticulously choreographed, synchronized, and shot. The stunts in some moments even veer towards routines sighted in the acts of the new circus performances.

Dry spots of storytelling occur throughout the running time of In the Mirror, especially in moments when narration fluidity needs to be preserved without leaving larger gaps. Nevertheless, Pakalniņa compensates for the stitched up fragmentary structure with running gags and visual puns. In the Mirror thus morphs from a re-imagination of a notorious fairy tale into a whimsical formalistic oddity. And a cinematic one.

In the Mirror enjoyed its world premiere at the 24th edition of Tallinn Black Nights Film Festival.

Do you feel this content is inappropriate or infringes upon your rights? Click here to report it, or see our DMCA policy.
EstoniaIn the MirrorLaila PakalniņaSpogulis