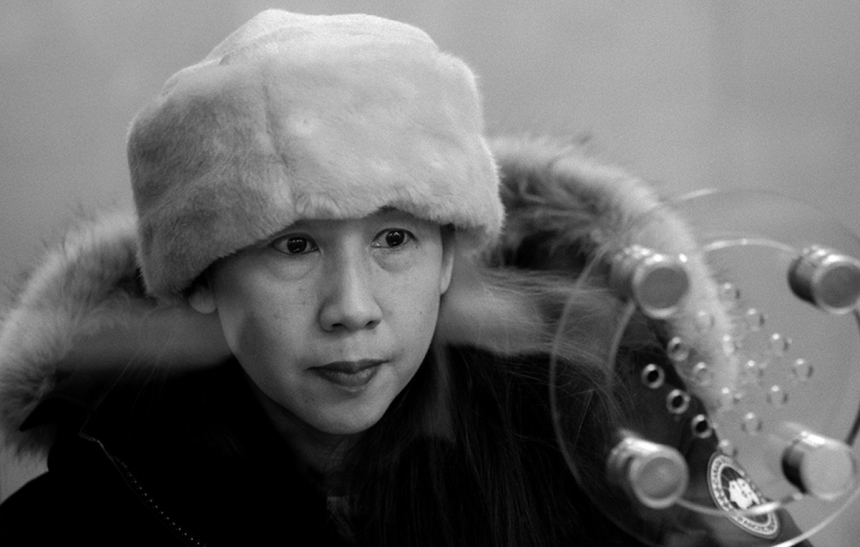 Romantic. Gorgeous. Giving of all the feels. This is hardly what one might expect from a documentary on the Lost & Found desk of a metropolitan transit hub. However, from the patient immensity of the opening shot of Prayer For A Lost Mitten, we are gently beckoned into the stylized-vérité universe of Montreal in deep winter.  What I have often been assured -- by Montrealers who currently reside there, or moved away -- is a glacial hellscape, here is rendered in high-contrast monochrome, as a seductive, magical place. The snow is perpetually falling, and being removed by machine and man, in universal harmony.

After setting the stage, people wander into the interior frame, a piece of plexiglass with holes cut into it, the clerk subtly shown in reflection. These people look for their lost spectacles, passport, or winter knitwear. It is so minimal, particularly in black and white, that we can only focus on the faces of the people as they search for their missing belongings. The disappointment. The joy. The relief. Or, perhaps, it is simply a way to to have an interaction with a stranger, to explain why the item is so important to them. Such wonderful faces on display.

Many of the lost articles have little to no intrinsic value, other than what they mean to the person who lost them. One woman embarks on an epic quest involving multiple metro cars, surface intersections, to find her cherished toque because it fit her just so. She made it herself, its absence creates a personal obsession.

We discover all of this because director Jean-François Lesage (also, curiously, credited as Scénariste) follows many of the successful, or in this case, unsuccessful, seekers home, and talks further, over the dinner table, or a house party or even on the shivering frigid streets, to learn more about who they are and what they find precious. Over the course of the film, we learn about new love contrasted with estranged family. A man shares the loss of his husband to AIDS. Another laments the innocence of his childhood, gone and never in reach again.

It is a lovely structure, controlled yet improvisational It reminded me why I glommed onto Richard Linklater in the early 1990s, after Slacker became a cult film. It reminded me of the brilliant simplicity of Manakamana, a 2013 documentary from Harvard's Sensory Ethnography Lab, which silently observes people riding a mountainous cable car in Nepal, and was perhaps the best film of that year.

Prayer For A Lost Mitten is a procedural, a confessional, and a love letter to the best of humanity. Frankly this is astonishing that in 2020 that it can come from the place of customer service. Urbane, cosmopolitan resilience is shown without fuss, as people talk about love and loss in ways that scale upwards to the profound. Transitioning always towards those snowy streets, and the denizens perpetually shovelling themselves out, a metaphor that feels just out of reach, but powerful nonetheless. Since the film is french, even Canadian french, it is about death. I am joking here, but not completely. And yet, it is hopeful, insofar as 'loss as an opportunity to discover' is the ultimate coping mechanism of the human race.

Because we can lose something so suddenly, so randomly - a mitten, a life, a memory, a future - this is what makes it precious. Prayer for A Lost Mitten is a gift you never knew you wanted.

Do you feel this content is inappropriate or infringes upon your rights? Click here to report it, or see our DMCA policy.
CanadaDocumentaryfacesJean-François LesageLost and FoundMontrealQuebecSnow