Blu-ray Review: GIRLFRIENDS, The One That Got Away 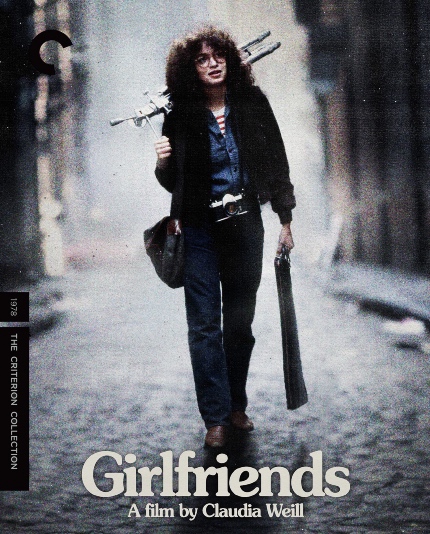 Fresh, timely, and relevant are the first words that sprang to mind when watching Girlfriends again recently. Directed by Claudia Weill in her narrative fiction debut, the film explores the relationship between women (and men) as they come of age in New York City during the late 1970s.

Melanie Mayron stars as Susan, who ekes out a living as a commercial photographer while harboring a burning desire to express her artistic impulses with the camera. Susan is friendly, funny, observant, and supportive; in other words, and in most movies made by men, Susan would be 'the best friend,' a supporting player on the fringes of a romantic relationship starring two conventionally attractive people.

Here, though, Susan is the protagonist, whose actions, desires, and occasionally awkward motivations power the entire movie. Susan's best friend and roommate, Anne (Anita Skinner), is the conventionally attractive one, though she is as riddled with doubts about her choices and ambitions as Susan. Anne, however, has decided to marry her boyfriend Martin (Bob Balaban), which is a more conventional path to adult happiness.

Susan is not convinced that she ever wants to marry and have children, which sets her adrift from Anne and into a quietly tumultuous period that is captured with great accuracy and fellow feeling by director Weill and screenwriter Vicki Polon. Weill had been making documentary films for about ten years after graduating from college, and so it's no surprise that Girlfriends looks like a documentary, in that it feels rough and unpolished.

Yet the film is also filled with lovely light and complementary darker shades of night, so it always feels lively while not overbearing. The production design fits the mood and the real-world setting, as does the cast, including Christopher Guest as a man who gradually becomes more important in Susan's life, and Eli Wallach as a married rabbi who employs Susan and is tempted to become something more.

In barely 90 minutes, the film tells a compelling story that had rarely been seen before 1978, and far too infrequently since, a story that revolves around a woman and is primarily focused on her relationships with other women. Claudia Weill directs nimbly and with a sure command of the filmmaking craft.

She raised money for the film herself, and then served as her own sales agent, selling the film to Warner Bros. for distribution. I remember that the image of Melanie Mayron in newspaper advertisement always appealed to me -- I admit to a small crush on the actress -- but my own teenage prejudices and masculine expectations kept me from seeing the movie at the time. Claudia Weill faced similar obstacles when making her next movie, It's My Turn, which soured her on the overwhelmingly masculine Hollywood of the time.

She returned to the East Coast and become involved in directing many stage productions and television shows, and also became a teacher, which she says has brought much artistic satisfaction. The new Criterion Collection Blu-ray features a very clean transfer of the picture along with a good collection of supplements for an essential film, including new interviews with Weill, writer Polon, actors Mayron, Guest, and Balaban, as well as a conversation between Weill and filmmaker Joey Soloway.

Two of Weill's early documentary works, Joyce at 34 and Commuters, are included to give a sense of her camera eye, along with an episode of Canadian talk show City Lights, with Weill and Mayron from the time of original release. Two essays are included in a booklet with the disc, one by film critic Molly Haskell and the other by scholar Carol Gilligan; the essays help place the film into cultural context and are both good reads.

Summing up: I wish Claudia Weill had been able to make more narrative films. But I'm very glad that Girlfriends lives up to -- and goes far beyond -- its reputation as a humane and fully engaged work of cinematic art.

Do you feel this content is inappropriate or infringes upon your rights? Click here to report it, or see our DMCA policy.
Anite SkinnerBob BalabanChristopher GuestClaudia WeillMelanie MayronUS