Review: FIREBALL: VISITORS FROM DARKER WORLDS is a Wonder to Behold 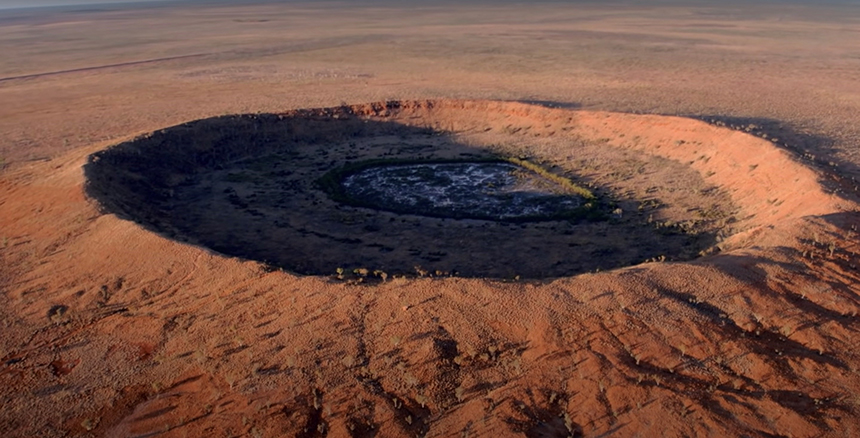 Legendary filmmaker Werner Herzog and Volcanologist Clive Oppenheimer met in Antarctica during the filming of Encounters at the End of the World in 2007. They made a big impression on each other, kept in touch and ten years later, collaborated on a film Into the Inferno, about volcanoes around the world and what they mean to people who live under their shadows. With their joyful new film, Fireball: Visitors from Darker Worlds, they embark on a globetrotting adventure once more, investigating meteorites and wondering about human existence in relation to the universe. It's a funny, engaging, inspiring and dare I say hopeful film, even though the subject touches upon the total devastation of our planet.

It is not a new thing for Herzog to focus on science and scientists in his films. Besides those with Oppenheimer, many of his documentaries over the years - White Diamond, Cave of Forgotten Dreams, Lo and Behold: Reveries of the Connected World and Nomad: In the Footsteps of Bruce Chatwin - have featured enthusiastic scientists in their respective fields. It is easy to see why he likes them: it's their tendency to be obsessive and passionate in their work. It's their infectious curiosity and wonder that he has affinity with. Their unending quest for truth is not dissimilar to the essence of what the filmmaker has been doing his entire career with his films.

Spanning five continents, Fireball: Visitors from Darker Worlds, features an array of wry, funny characters (most of them scientists), introduces many different cultures, and involves meteors in one way or another. There's a great deal of majesty in these celestial imprints on earth that the film presents - from Wolfe Creek crater in the Australian desert, to Ramgarh crater in Rajasthan, to Chicxulub crater in the Yucatan peninsula: the imprint of the biggest ecological disaster the earth has ever experienced millions years ago. Its impact crater is so huge, human eyes can't even detect its enormity. Cenotes, the water cave system created around the rim of the impact site and satellite pictures tell part of its story. Then there are quasi crystals that reveal the building blocks of space and micro-meteorites- dust particles that reveals their celestial beauty under the microscope.

But the real fun part of the film is its human subjects. These bright, inquisitive, funny scientists and enthusiasts are tirelessly entertaining and the filmmakers give enough time for each of them to shine. It is quite astounding to think that Herzog and company were there to film all of them, hopping from one continent to another. Oppenheimer is in charge of all the interviews, while Herzog narrates with his trademark wry sense of humor and rarely interjects from behind the camera. When he does, as he does at the Arizona State University meteor lab, it's to crack jokes when the conversation turns to Carl Sagan's famous quote that "we are all stardust". Herzog quips "I'm not stardust. I am a Barbarian! We meet a famous Norwegian jazz musician who collects micrometeorites on the rooftops of Oslo with his DIY equipment. Then there is Brother Guy, a scientist turned Jesuit Priest in the Vatican, who embodies a perfect marriage of religion and science, as he eloquently illustrates his philosophy in front of an impressive collection of meteorites, citing "You can't do science if you don't have that sense of awe. You can't believe in the creator God without experiencing creation." Then there there is Planetary Defense Coordination Office at the Pan-STARR observatory in Maui, where two scientists are daily monitoring the night sky to catch sight of any rogue meteors coming our way that might cause the earth's destruction.

It all culminates with Oppenheimer being on the polar plateau in Antarctica, thousands of square miles of ice stretched as far as the eye can see, with a team of South Korean scientists, to collect meteorites. The polar plateau as it turns out, is where the best specimens of meteorites can be found because of its high altitudes and freezing temperature that best preserve molecules in those rocks. There, surrounded by enthusiastic and highly emotional South Koreans, Oppenheimer finds a highly valuable meteorite specimen all captured on camera from a helicopter above. How can you not be emotional, when you are at the presence of a space rock that might be 4.5 billion years old that has been frozen in Antarctic ice for another hundred thousand years?

Funny and surprisingly hopeful in these dark times, Fireball is, in essence, the amalgamation of what Herzog has been doing throughout his illustrious career: it tries to awaken that sense of awe, sense of wonder in us audiences. He finds a great partner in crime in Oppenheimer, a bright scientist with matching lust for life and knowledge to instill in us that infectious curiosity and enthusiasm about, of all things, life. I sincerely hope they continue their collaboration in the future.