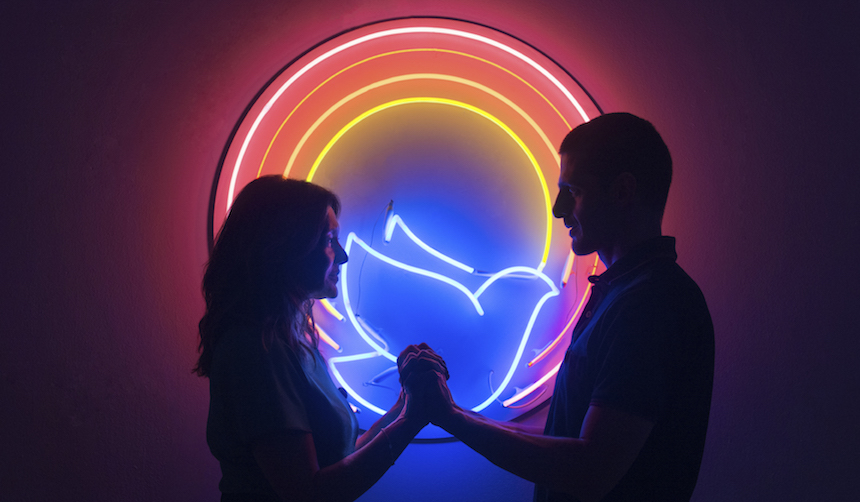 It's 2027 Brazil. The country has gone full Christian fundamentalist. Gabriel Mascaro (August Wind, Neon Bull)'s version of it is all neon and electronic music. Joana (Dira Paes) and Danilo (Julio Machado) are a middle class couple. She is a notary public, working in a gigantic concrete government building and he is a florist, working in their ground floor apartment complex. They haven't been able to conceive a child even though they try every possible way and method  (with hi-tech gizmos bought from China via mail). Something is wrong with Danilo's sperm.

They belong to Divino Amor/Divine Love, a Christian religious group exclusively for couples. It's a government mandated therapy/support group for couples who’s been having marriage troubles. It’s all nice and good on the surface but definitely has cultish air. They do trust exercises and also share partners in bed.

Joana, a devout Christian, using her position of power as a bureaucrat, has been discouraging couples who seek a divorce at her job. Her sometimes aggressive tactics don't sit well with her clients as well as her superiors. She also constantly visits a drive-thru church to seek advice from a pastor. These store front churches are everywhere in the future Brazil, lending an easy access to god. But god has been silent on her and her husband's prayers to have a child and therefore her faith is waning.  Then a miracle happens. She is pregnant. But who is the father?

Mascaro, along with a fellow filmmaker from the region of Pernambuco, Kleber Mondonça Filho (last year’s smash hit Bacurau), takes on sci-fi genre to satirize the current political climate of Brazil. German director Christian Petzold once told me that his use of genre conventions in his films gives him more freedom in reflecting the current state of things. It also rings true here with the recent crop of Brazilian films, including Adirley Queirós’ Once There Was Brazilia.

But unlike over-the-top carnage of Bacurau, Divine Love is more subtle and downbeat, somberly reflecting on the life under the extreme right-wing, religious zealotry of Bolsonaro regime. Seductively photographed by Diego García (Cemetery of Splendour, Our Time, Neon Bull), the film is perfectly framed and its neon colors beautifully rendered. The film inserts in just enough details for us to see that the country has changed: women on the beach are wearing head to toe black garb - very much like burkini, every building, businesses and shops have customer identifying prompter at the door by their name, marital status and whether they are pregnant or not and there is no mention or show of homosexuality whatsoever anywhere. In true Mascaro fashion, sex scenes are very graphic and honest, but only limited to married couple or consenting adults, all heterosexual.

The film is narrated by Joana's child who might be born out of immaculate conception and just might be the savior people have been waiting for, but left nameless and unregistered, because of he is born into religious fundamentalist country once was known as most culturally, sexually, racially diverse country in the world, Brazil, less than a decade ago.

Divine Love is a quietly biting satire, brilliantly realized by Mascaro, a director who is operating on the highest level of artistry in every aspect. Do not miss this!

Divine Love gets theatrical/virtual release on 11/13 by Outsider Pictures. Please visit their website for more information.

Dustin Chang is a freelance writer. His musings and opinions on everything cinema and beyond can be found at dustinchang.com