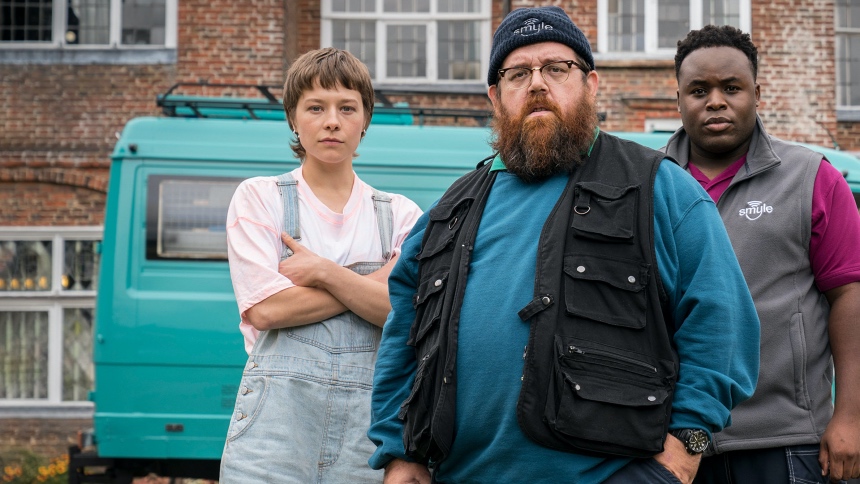 It turns out that there's a good reason to be afraid of ghosts.

Truth Seekers
All eight episodes, running about 30 minutes each, are now streaming on Amazon Prime Video.

Lost in a crush of supernatural-themed shows that debuted during the Halloween season, I watched the first three episodes of Truth Seekers with decreasing interest, due entirely, I now realize after watching the remaining five episodes, to my own expectations.

Created and written by Nick Frost, Simon Pegg, James Serafinowicz and Nat Saunders, Truth Seekers sounded like a show that was tailor-made for fans of Frost and Pegg, a partnership that I first became aware of when I sat down to watch Shaun of the Dead (2005) in a packed movie house in Hollywood on its opening weekend, an uproarious experience that still ranks high in my own personal memory banks.

Of course, the duo's partnership started before that, notably in the British television show Spaced Out, but in America, they were inextricably linked with writer/director Edgar Wright, and so their other endeavors, both solo projects and with each other (but without Wright), often got lost in easy yet needless comparisons. Here's another easy yet needless comparison that I made immediately after watching those first three episodes: oh, this one features Nick Frost in the leading role, and it's not as immediately sharp or edgy, and why is Simon Pegg wearing such an outlandishly bad wig?

Since the show is all about the subject, the truth is that it was my own expectations that were out of whack with what the show, actually, is, which has more to do with the nature of friendships and how lasting partnerships can develop. And, yes, there's a bit to do with the paranormal, and a number of nods to classic films and TV shows are weaved into the material as well.

Directed by sketch-comedy veteran Jim Field Smith (She's Out of My League, Butter), the first episode follows ace broadband installer Gus Roberts (Nick Frost), who is newly partnered with Elton John (Samson Kayo) by cable company boss Dave (Simon Pegg). Gus lives with dear old irascible Richard (Malcolm McDowell) and, on the side, is also a paranormal investigator and has a YouTube channel with a small following.

Elton lives with his older sister Helen (Susie Wokoma) and also has a YouTube channel, featuring makeup tutorials, and is measurably more popular than Gus. Soon enough, Gus and Elton encounter the beguiling Astrid (Emma D'Arcy), who claims that ghosts are chasing her. The group steadily coalesces into an unruly unit bonded by their common interest in investigating paranormal phenomena.

The show has more on its mind than a series of ghost-busting episodes; the overarching arc eventually becomes more pressing, yet before that happens, there is time for the characters to be developed and for their backstories to be explored. Everyone has a story to tell, even if they are reluctant to do so; the past weighs upon them as individuals, and affects their behavior and attitudes toward others.

The comic elements predominate the early episodes, and the horror elements are mixed on top of that at first, before gradually enveloping and deepening the tenor of the show. The likabilibity of the characters, enhanced by the winning performances by the cast, adds agreeably to the show's formula for success. It makes it easy to root for a victory by ordinary people against extraordinary odds.