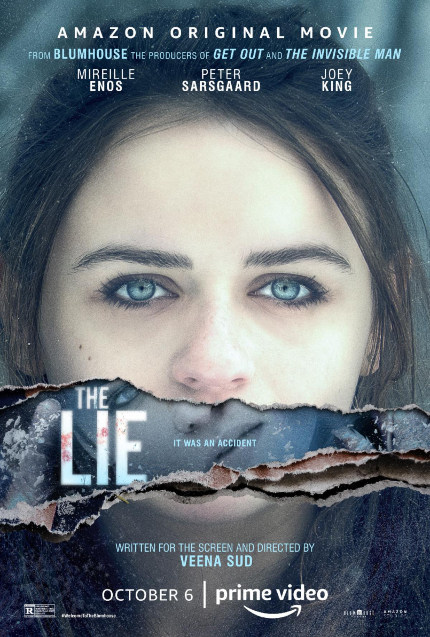 Spare the rod and spoil the child.

Still wrestling with the fallout from her parents' divorce, 15-year-old Kayla (Joey King) bounces between her mother (Mireilla Enos), an attorney at a corporate law firm, and her father (Peter Sarsgaard), a musician in a rock band.

It's her father who is driving ballet student Kayla to a weekend retreat in upstate New York on a snowy day when the teenager spots her new best friend at an isolated bus stop, leading to deadly events that soon disrupt the lives of everyone involved.

Adapted from the German film Wir Monster (or, We Monsters, 2015) by writer and director Veena Sud, The Lie becomes inexorably more twisted as time passes. The steady escalation of tension -- simmering, occasionally boiling over, and then simmering again -- is reminiscent of The Killing, which Sud adapted from the Danish series Forbrydelsen.

As in that Americanized series, Enos is once again a voice of reason, in contrast to Sarsgaard, who quickly swings to a more emotional state. Thereafter, the two actors trade their emotional positions, deking and duking as former marriage mates often do, while also conveying remnants of the love that they once shared.

And they love their daughter! Perhaps too much, as Kayla is a bit of a brat, which is to be expected of anyone who is 15 years old and spoiled by her parents, probably out of guilt for their divorce and the subsequent havoc rained down upon their only child as a result. Kayla acts out frequently, which, again, is to be expected, though she has personality difficulties that remain hidden and somewhat mysterious.

Finely and persuasively performed, thoughtfully arranged for maximum effect, and designed beautifully to unfold primarily during daylight hours, The Lie is not a typical horror movie nowadays. Instead, it's a high-strung family drama whose horrors lie only slightly below the surface, out of sight but never out of mind.

Do you feel this content is inappropriate or infringes upon your rights? Click here to report it, or see our DMCA policy.
Amazon Prime VideoJoey KingMireille EnosPeter SarsgaardUSVeena Sud