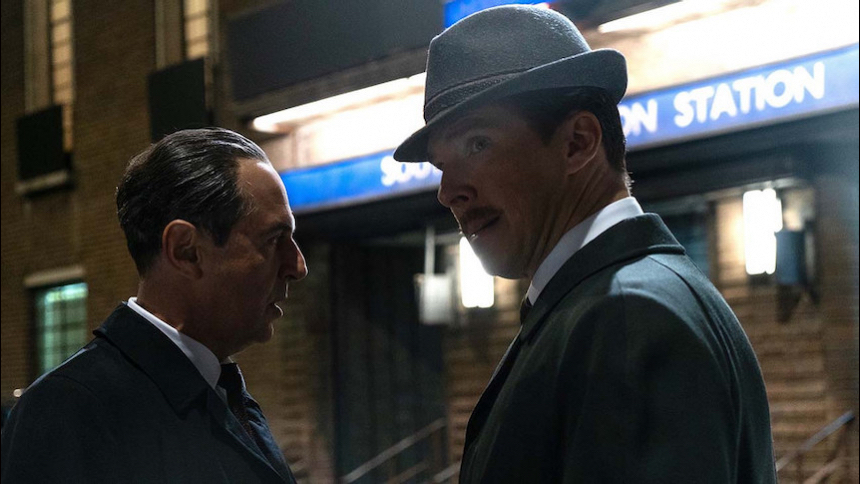 If a mustache could be credited as co-lead, then the obsessively cultivated growth under Benedict Cumberbatch's proboscis in The Courier (formerly titled Ironbark), a historically based, Cold War espionage drama that unfolds like a lesser-known Bridge of Spies-inspired side story, probably would deserve its own, standalone title card.

Since, though, mustaches tend to get awards consideration -- if they get consideration at all -- as part of the makeup department's usually invisible work, Cumberbatch's mustache in The Courier will have to make do as an unsung, if certainly not unseen, supporting role, keeping the Cumberbatch's -- or rather his character's -- upper lip suitably warm during bone-chilling, organ-freezing Soviet winters. As for Cumberbatch, he delivers a carefully calibrated, unadorned performance typical of old-school, no-frills, throwback filmmaking from a bygone era, modestly budgeted, modestly conceived, and ultimately, modestly executed.

When we first meet Greville Wynne (Cumberbatch), he's living his next-best life as a traveling salesman, selling heavy industrial machinery to willing buyers in the Eastern Bloc. Rare among Westerners, Wynne travels back and forth to England without the KGB or its Eastern Bloc analogues becoming suspicious of his actions. The Soviets and their unwitting allies, it seems, want what Wynne is selling to help them keep up with Western industrial advances.

That makes the generally unassuming Wynne a perfect mark for a joint CIA-MI6 collaboration involving a brash, American agent, Emily Donovan (Rachel Brosnahan) and her morally flexible British counterpart, Dickie Franks (Angus Wright). They see Wynne, his easy, glad-handing manner, and more importantly, his numerous contacts on the other side of the Iron Curtain, as the key to a daring and ultimately, daringly dangerous high-stakes mission to save the Western world from the Soviet Union and communism.

As a typical post-WWII Brit, Wynne smokes and drinks too much, filled with barely suppressed or repressed anxiety, less for the Cold War and its hot war implications than for keeping up on his mortgage for his small, tidy home and not raising any suspicions from his wife Sheila (Jessie Buckley). Having broken his marriage vows at least once before, Wynne clearly understands the source of Sheila's doubts about his seemingly erratic, secretive behavior, but can't read her into his new, secret life once the Powers-That-Be pull him into spy-work in the Eastern Bloc, resulting in a strained, tense relationship that highlights the real, personal costs of undercover work both universally and Wynne's case in particular.

The future object of Wynne's manufactured affection, Oleg Penkovsky (Merab Ninidze), a high-ranking military colonel deeply concerned about Nikita Khrushchev's (Vladimir Chuprikov) voluble, temperamental personality (insert topical commentary here about emotionally unstable leaders and nuclear buttons here), doesn't even know Wynne exists. He's just eager to relay the secrets of the Soviet Union's nuclear program, not because -- at least in his own eyes -- he's a traitor, but because he's a patriot, hoping to avert a nuclear exchange that could leave tens of millions dead. With the events surrounding the build-up to the Cuban Missile Crisis heating up the Cold War, Penkovsky sees no alternative but to parlay his unique access to the USSR's nuclear program into averting war with the West.

At least initially, Wynne represents just a means towards an end for Penkovsky, but over time -- specifically a handful of meet-and-greet, get-to-know-each-other, smoke-and-drink, drink-and-smoke, dialogue-heavy scenes typical of prestige period films -- the two began to develop first, a bond and later, a genuine friendship forged over, not just their desire to contribute to the common good (i.e., averting nuchal war), but the granular details of their personal lives. Despite the barriers of time, space, and ideology, the two men have more in common than they think, a theme that writer Tom O'Conner and director Dominic Cooke (On Chesil Beach) hit often and hard during the film's slightly overlong, overindulgent middle section. O'Conner and Cooke seem extra keen on making sure their audience understands the depths of the friendship between the two men before letting the historical record tear them apart.

That low-key middle section -- spiked by the men's initial wariness around each other and later elevated suspense wise by periodically reminding audiences that discovery of their joint mission will likely lead to imprisonment, torture, and/or death -- eventually gives way to a darker, grimmer reality that permanently removes any possibility that we're watching the equivalent of Bondian escapism, but instead seeing something closer to the bleak, soul-draining machinations of John le Carré's bureaucratic spies.

Even if it reflects historical reality, the abrupt tonal shift doesn't always work, but it remains never less than enthralling, in large part due to Cooke's steady, unobtrusive hand behind the camera and Cumberbatch and Ninidze's note-perfect performances as like-minded men divided by the irrefutable calculus of Cold War geopolitics that places little value on human lives and every value on the fate of nation-states and their allies.

The Courier will be available on October 30 via various VOD platforms from Lionsgate.

Do you feel this content is inappropriate or infringes upon your rights? Click here to report it, or see our DMCA policy.
Benedict CumberbatchDominic CookeMerab NinidzeRachel BrosnahanUK

More about The Courier