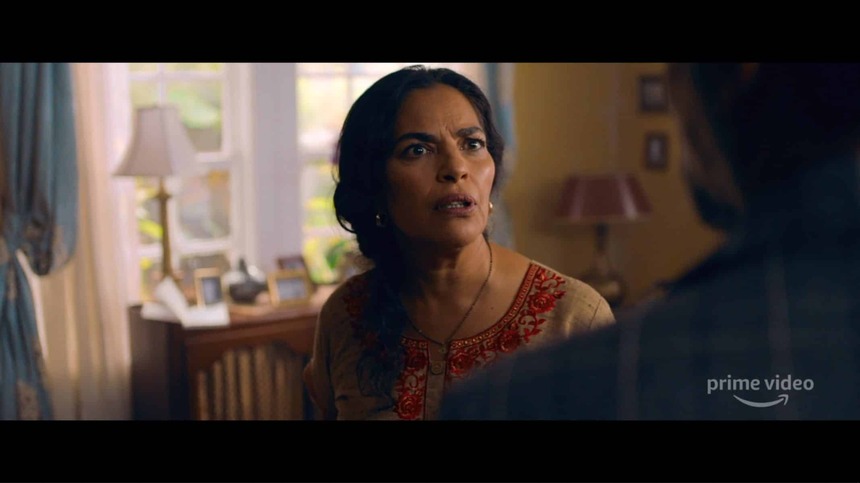 We in the west tend to look down upon the practice of arranged marriages, but it has some benefits: often couples are brought together because of similarities in socio-economic bckgrounds, similar goals, interests, and expectations. And yes, I am aware of the negative side especially with regards to the treatment of women; but our romaticized ideal of 'love conquers all' is the other extreme with its own large set of problems. There is something to be said to a happy medium: understanding practical commonalities which can be beneficial to a life together, and trusting your instincts when you know a man is no good.

Evil Eye looks at the relationship between mother and daughter in an immigrant family, and the cultural disconnect that can often happen when each sees conduct through a different lens. Based on her audio play and adapted by Madhuri Shekar, co-directors Elan Dassani and Rajeev Dassani take what is essentially a supernatural thriller and add a few horror twists. Perhaps unnecessary, but with acting power like Sarita Choudhury and upcoming talent Sunita Mani, it's an enjoyable story with enough twists to keep the viewer on their toes.

Usha (Choudhury, Mississippi Massala, Jessica Jones) is on a mission: to find the perfect match for her daughter Pallavi (Mani, Glow). Pallavi is happy with her life as a professor, and chafes at her mother's efforts through constant phone calls between Delhi and New Orleans. But Pallavi finds what seems to be the perfect match on her own: Sandeep (Omar Maskati) is wealthy, kind, generous, and according to the astrology charts, a match made in heaven. But Usha, suddenly, is distrustful, and she is more and more convinced that her own trauma from a violent relationship will repeat itself with her daughter.

Usha has her superstitions: she checks astrological charts, believes in reincarnation, and gives her daughter jewellery to protect her from a curse she is convinced is real. But maybe it is? Usha's own experience with an abusive relationship that formed out of love makes her protective of Pallavi; it's not so much that she wants her to be married, it's that she doesn't want Pallavi to make her mistake of falling into a cycle of abuse. Usha is worldly enough to know her daughter wants her own path, but her instincts, and past mistakes, make her see danger even if it might not be there. Pallavi is frustrated at how it seems her mother will never be happy with her choices, and as a consequence, her choices are not made with her own best interests at heart, and more out of poorly-times rebellion.

Given that much of the story takes place over phone calls between Usha and Pallavi, it's a challenge to keep it dramatic enough that it's not just two people pacing in different locations. Luckily, Choudhury and Mani have terrific chemistry. They deepen what could be a stereotypical interefering mother/dismissive daughter relationship and show how layered it is, made of mutual love and respect as much as exacerbation. Every parent wants to protect their child from harm, and every child wants to make their own decisions; this story pushes that to a somewhat realistic extreme.

The Dassanis throw in some visual and sound editing tricks to give the film, or at least the third act, something of a horror feel, but it's essentially a thriller despite its supernatural leanings. As we learn more of the trauma that Usha suffered, how the guilt has weighed on her to the point of madness, feeding anxiety even though she might be right. There is solid slow-burn work as the stakes get higher (and a few times you're likely to yell at Pallavi when you know she's making a terrible decision), and Choudhury (unsurprisingly) shows that slow burn on her face, finding herself needing to keep more in control as she loses control. Even as the truth is revealed, it's less frightening and more creepy, when we know there will be a confrontation and that Usha will fight tooth and nail for her child.

Within this culturally specific story, is a deeper one of the abuse that too many women have suffered and the trauma they carry for a lifetime; neither Shekas nor the Dassanis belittle or dismiss that trauma, even if it's taken to a supernatural place. Evil Eye walks a familiar story into thriller territory.