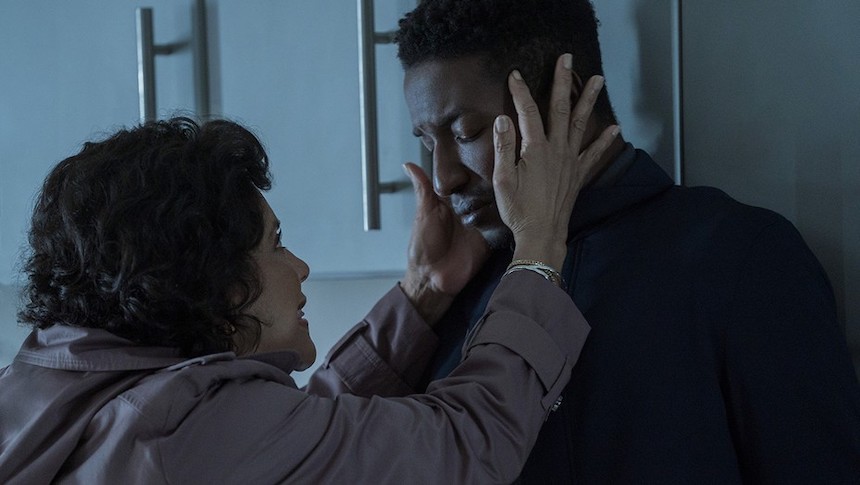 With an all-Black cast and not a single firearm or law enforcement officer in or out of the frame, Black Box unfolds as a refreshingly efficient, economically directed Blumhouse entry with just enough twists, turns, and switchbacks to keep even the most jaded viewers on their proverbial toes wondering where Black Box will go next, all the while consistently engaged with its nuanced, layered exploration of family, trauma, and reconciliation.

Six months after the devastating loss of both his wife and his memory in a car accident, Nolan (Mamoudou Athie), finds himself perpetually perplexed, in continual need of assistance from his preteen daughter, Ava (Amanda Christine), and his longtime best friend, Gary (Tosin Morohunfola), a medical doctor at the local hospital where Nolan not coincidentally spent the better part of several months recuperating from the brain trauma that’s robbed him of his memory and the personality traits dependent on those memories.

With his career as a photojournalist on hold and vague, discomfiting nightmares besetting Nolan on the regular, he decides to accept Gary’s advice and sign up for a new experimental procedure with Dr. Lillian Brooks (Phylicia Rashad), a maternally minded neuroscientist working on the metaphorical cutting edge of memory retrieval and identity reconstruction.

Brooks starts with simple hypnosis, convincing Nolan to create a safe space, a safe room inside his fragmented mind, and the eerie, bone-cracking figure who haunts his dreams and nightmares that superficially resembles Get Out’s Sunken Place. Brooks, however, has moved beyond hypnosis and into a virtual technology that allows Nolan to enter his memories from his safe room using an analog watch and a recurring mantra that proves to be far less useful than Brooks thinks.

With this new, “black box” tech, presumably aided by massive computing power somewhere in the hospital, Nolan begins a deep dive into memories that are both his own and yet maybe not his own, including a wedding ceremony filled with faceless attendees in an anonymous church and the apparent aftermath of a violent row with his blank-faced wife in an unknown apartment.

Those disturbing, incomplete memories and what they might mean for Nolan’s past (i.e., physically abusive toward his late wife), however, keep bringing him down. When Nolan discovers the possible location of the apartment in his dream-memories, Nolan begins to detach himself emotionally from an increasingly wounded Ava and a perplexed Gary.

Those memories provide Black Box with its central hook and a key or hinge plot point that Osei-Kuffour and his co-writers, Wade Allain-Marcus and Stephen Herman, deliberately resolve at the one hour or second act mark. To say more would be to venture too far into spoiler territory, but credit to Osei-Kuffour and his co-writers for doing the structural work screenplay wise in setting up a story-refining and -redefining turn that feels both unexpected and just as importantly, inevitable.

Ably assisted by fleet, forward-moving screenplay, deft, fat-free direction, and a material-elevating cast, starting with Mamoudou Athie and Tosin Morohunfola as believable best friends and continuing with Amanda Christine as Nolan’s wise-beyond-her-years daughter (a role that could have easily led to a cloying, inauthentic, ultimately annoying performance), and old-school thespian Phylicia Rashad as a judgment-challenged research scientist (she has trauma of her own to integrate), Black Box only outstays its welcome when Osei-Kuffour introduces the unnecessary, if s obligatory, sequel-ready ending.

Before then, though, Black Box delivers a satisfying mix of originality, suspense, and emotion, boding well for future “Welcome to the Blumhouse” entries and Osei-Kuffour’s career as a filmmaker.