Now Streaming: ALL BECAUSE OF YOU, Comedy, Romance, Only a Bit of Action 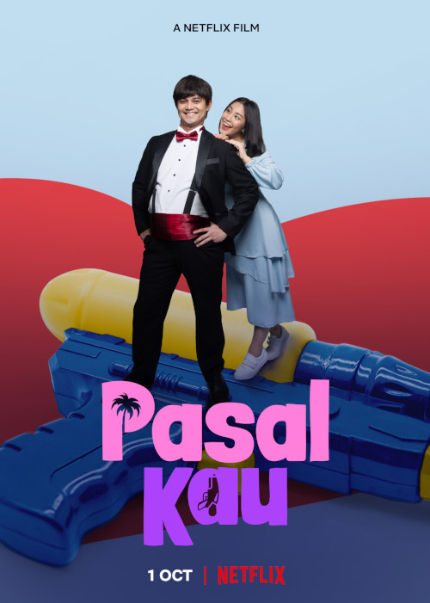 All Because of You (orig. title: Pasal Kau)
Now streaming on Netflix.

Earlier this year, the presence of Yayan Ruhian and the promise of martial-arts action drew me into watching Wira, which is still streaming on Netflix and delivers "generally pleasing and entertaining results," as I wrote in my review. Around that same time, I also watched Paskal: The Movie (2018), also still available on Netflix, which is "a zesty military action-picture," in my estimation.

Thus, when director Adrian Teh's latest picture, All Because of Use, popped up on Netflix recently, I eagerly sampled it. The trailer suggests it's a goofy comedy, but also played up the action elements, even including a 'blink and you miss it' moment, revealing Yayan Ruzak, who appeared previously in Wira.

In truth, I should have read my own review of Wira again, in which I provided more background on the director's career. As I wrote:

"Born in Malaysia, Teh made his directorial debut with the comedy Lelio Popo (2010), and followed that with three more comedies before producing Nick Cheung's horror thriller Ghost Rituals (2014) and then directing his own horror thriller, The Noise (2015). After helming another comedy, Goodbye Mr. Loser (2017), Teh tackled the ambitious, avowedly patriotic Paskal: The Movie (2018), which met with popular success in the territories where it was released."

To be fair, I remember quite clearly that both Paska and Wire shared certain strengths and weaknesses, namely: "characterizations tend toward the shallow end of the pool, and the narrative wiggles around loosely, but it makes up for that with its variety of extended action sequences." Really, then, it should have come as no surprise to me that All Because of You features loosely sketched-out characters.

Hairul Azreen (from Paskal and Wira) returns, this time as Aiman, a flabby, insecure fellow who works at a resort hotel. His best friend is kitchen worker Jane (Janna Nick) who dreams of marrying Aiman and becoming a professional chef. Their friends are a goofy lot, united in their limitations in speaking English with their international guests.

When their boss learns that a social media star will be visiting, he demands that the well-spoken Jane teach the boys how to speak English better, all while Jane's continued efforts to let the clueless Aiman know that she wants to start a romance.

Meanwhile, another celebrity, Sofia (Sophia Albarakbah), checks in with her two equally stunning friends, setting the hearts and loins of the boys aflutter. For some unknown reason, she pays special attention to Aiman, who immediately crushes on her, leaving Jane emotionally crushed in turn.

After about 56 minutes, director Teh introduces the action that the trailer teased, but the comedy holds sway, even when people are being gunned down indiscriminately. It's all intended to be lighthearted and sweet, but I admit that I was hoping for more full-scale, extended action sequences, instead of a continuing series of jokes and comic asides.

As with his two previous films, Teh has good ideas about staging the action scenes in the third act of the film, but the framing and editing support the intended comedy effect, rather than the potential action rush. This is reinforced by bits of animation that appear, most notably in the final stretch.

Teh brings back other actors who appeared in Wira, including Fifty Azmi, Ismi Melinda, Henley Hill, Dain Said, and the aforementioned Yayan Raza, whose cameo appearance is very brief indeed. It's great that Teh and the actors wanted to make something different than the action-movie followup that might have been expected, but the bigger challenge for viewers outside of Malaysia is that humor about bone-headed characters and women who pine away for unresponsive men doesn't travel well nowadays.

Do you feel this content is inappropriate or infringes upon your rights? Click here to report it, or see our DMCA policy.
Adrian TehHairul AzreenJanna NickMalaysiaNetflix