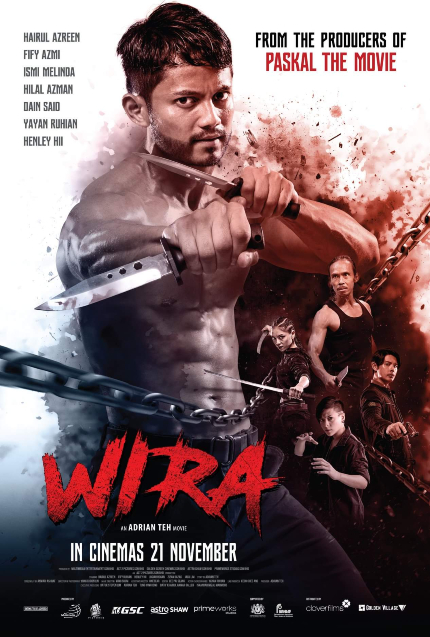 Director Adrian Teh tries his hand at a martial-arts action picture, mixed with a family drama, to generally pleasing and entertaining results.

Born in Malaysia, Teh made his directorial debut with the comedy Lelio Popo (2010), and followed that with three more comedies before producing Nick Cheung's horror thriller Ghost Rituals (2014) and then directing his own horror thriller, The Noise (2015). After helming another comedy, Goodbye Mr. Loser (2017), Teh tackled the ambitious, avowedly patriotic Paskal: The Movie (2018), which met with popular success in the territories where it was released.

Available to stream on Netflix, Paskal is a zesty military action-picture. Its characterizations tend toward the shallow end of the pool, and the narrative wiggles around loosely, but it makes up for that with its variety of extended action sequences.

I haven't seen Adrian Teh's earliest films, but his latest, Wira, demonstrates some of the strengths and weaknesses of Paskal. It follows Hassan (Hairul Azreen), who leaves the military service after learning that his beloved mother has taken a turn for the worse back in their hometown.

Hassan thought he had left his impoverished, unsightly home behind forever when he moved away eight years previously. His father, Munas (Hilal Azman), remains harsh and unkind; meanwhile, his younger sister Zain (Fify Azmi) has followed in his footsteps and become a mixed martial artist.

Zain has also incurred a large debt to the local criminal kingpin, Raja (Dain Said), whose daughter Vee (Ismi Melinda) has just soundly thumped Zain in a match, thanks to the covert assistance of a small blade. Hassan arrives with the intention of making peace and payment arrangements with Raja, for whom he formerly worked, and then taking his family away to some place much nicer than the concrete block of an apartment building, where they subsist at the behest of slumlord Raja, who is supported by the evil presence of his mysterious head of security, Ifrit (the great Yayan Razak, known for The Raid, The Raid 2, Star Wars: The Force Awakens).

Hassan's only neighborhood ally is childhood friend Boon (Henley Hill), now a good cop who has looked out for Hassan's family but knows he is overmatched against Raja and his army of armed men.

As a director, Adrian Teh appears to be quite comfortable staging and shooting dramatic scenes of family tension that continually bubbles up around Hassan. The action sequences are a mixed bag; some are fluid and inventive -- an early scene when Hassan is trying to make peace with Raja's resentful quasi-soldiers after insulting one of them shows a welcome flare -- while others tend to undermine the talents of the players involved, due to awkward framing of the action and a quick finger on the edit button.

Yayan Ruzak, for example, is absolutely a marvel to watch. It feels mandatory that any director should showcase him to the fullest extent possible and in the widest shots as possible, with as little evident cutting as possible. That's not always the case here.

Even so, the action sequences in general are spaced nicely throughout the film, and each one is sufficiently different from the other to sustain interest in how they will play out. On that note, Teh keeps a few good surprises in store until they are ready to be unleashed, which works to the film's advantage.

Summing up: The dramatically-inclined Wira doesn't quite live up to all its action-movie potential, but it's definitely a good, worthwhile watch.