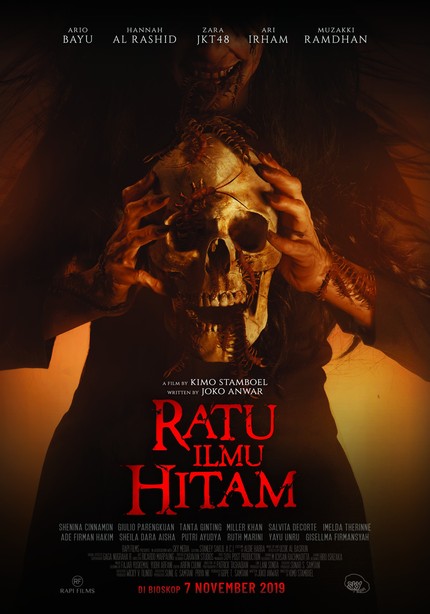 If you like your horror movies super gross, you are in for a treat with director Kimo Stamboel's sophomore solo feature, a loose remake of 1981's Indonesian classic, The Queen of Black Magic. With the world beginning to rediscover this nation's rich history of genre film after the worldwide success of Joko Anwar's incredible Satan's Slaves pseudo-prequel three years ago, now is the time for Indonesian filmmakers to shoot their shot on the international market, and they are not letting the opportunity pass them by. Stamboel takes little more than the title and the presence of a vengeful witch from the original in his new take on the story, making it his own in this incredibly entertaining and gooey spectacle.

Upon hearing of the poor health of their aging mentor, a group of former orphans and their families descend upon the rural orphanage where they spent their childhood. They are met by a pair of old acquaintances, former roomies, now married to one another, who stayed behind he help run the place. Something seems a bit off about them, but the excitement of seeing old friends soon puts any awkward feelings on the back burner and the reminiscing begins.

The orphanage is strangely quiet as the children have all been sent out on a field trip by bus, but when Hanif (Ario Bayu) goes out to investigate an accident he had on the way to the reunion, he makes a gruesome discovery. There's a reason the kids haven't returned, they are all dead, very dead, disgustingly dead aboard their abandoned bus. Hanif double times it back to the orphanage, but decides to keep this information to himself until he can learn more, but in the meantime, things begin to get very weird.

It takes about half an hour for The Queen of Black Magic to begin cranking up the crazy, but when it does, it goes for broke. Mysterious forces begin to overtake various members of the reunion party, preying on their deepest weaknesses and insecurities to exact, violent, bloody, super gory destruction upon them, and no one knows why. Well, almost no one...

It turns out that this night was decades in the making. Long buried secrets begin to bubble to the surface, and the sins of fathers are visited upon their sons and daughters as a witch long thought dead returns to exact her bloody vengeance upon not only the men who harmed her directly, but also anyone who benefitted from her pain. The Queen is not messing around.

Stamboel is no stranger to these bloody waters. As half of the famed Mo Brothers with Timo Tjahjanto, he helped kick-start the modern Indonesian genre renaissance in the early '00s with films like Macabre and Headshot.  Now back with his second solo effort after last year's entertaining video game adaptation, DreadOut, Stamboel has definitely upped his game with this film that feels more like a collaborative work and less like a job for hire.

There's a reason for that, while Tjahjanto may not be on board with this film, Stamboel wasn't alone, he benefits greatly from a script by Indonesia's genre film giant, Joko Anwar. Anwar is able to take what could've been little more than a (supremely satisfying) gross-out fest, and turn it into a real, honest to goodness movie. Stamboel's confident direction and a stable of genre film vets make this one of the better horror films out of the region recently, perhaps even topping Anwar's own Impetigore from earlier this year.

I could easily spend a thousand words giddily running down the numerous incredible gore set pieces (seriously, somebody needs to hire these Indonesian FX artists to work on films outside their country), but I'd rather leave you to discover the true joy of The Queen of Black Magic. While the film could perhaps stand to lose about 10 minutes of the up-front exposition, it's not a terrible hindrance, and does help flesh out the characters a bit so you care more when their flesh is ripped from their bones in the bonkers finale.

A few days ago I joked on twitter that Indonesian genre film greatness has been something of a secret handshake among the hardcore genre film fans for at least 15 years now. However, with films like Satan's Slaves, May the Devil Take You Too, and now The Queen of Black Magic making their way to Shudder, along with numerous entertaining but undeniably lesser films showing up on Netflix and other portals, it's becoming harder to ignore this powerhouse nation's output. I don't know about you, but I'm certainly ready for it. Bring on the bugs, blood, and bones!

More about The Queen Of Black Magic