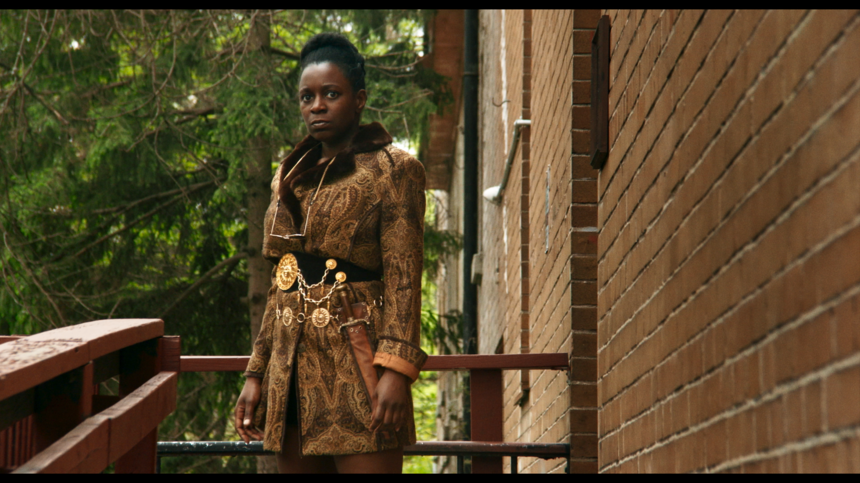 Having moved into television, Denzel Washington is hoping to land the role of Angel in a reboot of Buffy the Vampire Slayer; he's interested in the role because of Angel's struggle with testicular cancer. But alas, being too old, he must settle for the part of Buffy's father. But he's working with a great new screenwriter, Marie-Cobra, who is hoping her next work will be a masterpiece, though she is somewhat interrupted by the arrival of her best friend. Mélusine has come to Montréal from Trois-Rivières with her possibly magic and large vase, in hopes of learning english. Marie-Cobra's ex, a pastor, is musing on impossible loves while still pinning for her and having trouble holding on to his parioshioners, and there's a woman harming any cat who comes across her path.

If you're thinking this is all absurd, well, it is. There Are No False Undertakings, the latest feature film from Québecois director Olivier Godin, is a series of vignettes, connected by the characters are their various undertakings which they each hope will improve their lives. They talk to each other, at each other, at the audience, and are occasionally accompanied by a pseudo-Greek chorus. While on this surface it might all seem a bit ridiculous, you don't have to scratch too deep to see a reflection of how we all behave in our daily lives.

This is an expression of what would happen if we all said our strange and crazy thoughts out loud. We feel stuck in the rut of a small town and make the move to the big city; we imagine leading a congregation to understand the bodily chasms that lead to the heart; writing a screenplay about a poet who diffuses bombs (or maybe we are that poet). The power of money via learning english (with a lock of face-slapping), the vital differences between a walk and a stroll; the philosophy behind Buffy and Angel's love.

The friendship between Marie-Cobra (Tatiana Zinga Botao) and Mésuline (Leslie Mavangui) becomes the centre of this increasingly bizarre world; the scenes, all sketches of what each is envisioning for their respective writings, as they both observe and participate in the absurdity around them. Godin expertly blends the theatrical and the cinematic; as a mosaic of moments, the various scenes, particularly the interior ones, are given a colour and tone of intimate surrealism, with reds and blues to emphasis emotional states. Outdoor scenes are given a larger, broader humour and absurdity, as if we have wandered into a parallel universe, one that mirrors our own closely enough.

At nearly two hours, it could have probably trimmed its time a bit; absurdism can get tiring when the audience has to keep up with all the complicated connections, and perhaps a few of the vignettes didn't quite find their feet. Yet overall, There Are No False Undertakings is a bizarre journey into the oddities of a collective imagination, one in which you will likely find your own thoughts (ones you thought to never speak aloud) reflected in delightful characters and their deadpan yet whimsical understakings.

Do you feel this content is inappropriate or infringes upon your rights? Click here to report it, or see our DMCA policy.
Florence Blain MbayeFrançois-Simon PoirierIl n'y a pas de faux métierLeslie MavanguiOlivier GodinTatiana Zinga BotaoThere Are No False Undertakings