70s Rewind: PHANTOM OF THE PARADISE, Monsters From The Id Live Among Us 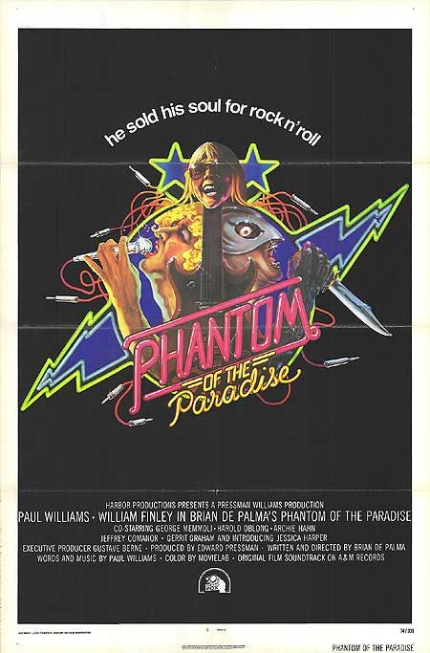 Every generation gets the monsters it deserves.

Phantom of the Paradise
Originally released in U.S. theaters on November 1, 1974.

First published as a full volume in 1910, Gaston Leroux's novel Le Fantôme de l'Opéra drew inspiration from real-life events as well as tall tales dating back to the mid-19th century. Its first adaptation into a film was lost after its release in 1916.

Lon Chaney, Sr.'s portrayal of the titular character in the 1925 film adaptation is quite striking, especially as his first appearance comes rather mysteriously as the spectral figure from legend. (This version is available to stream on Amazon Prime Video.) Frequently cited as the first of Universal Studios' classic monster movies, which kicked into high gear after the twin success of Dracula and Frankenstein in 1931, the silent version plays up the legendary mystery of the haunting phantom.

A number of cinematic adaptations have followed in its wake, with each also diverging from the novel's original narrative as the makers saw fit to distinguish their version from its predecessors. Claude Rains exerted a tremendous force of personality in the elegantly colorful 1943 adaptation from Universal Studios, becoming fiercely overpowering toward the other players. (Available to stream on Peacock.)

In 1962, Hammer Films Productions released Terence Fisher's version starring Herbert Lom, which was shot in somewhat muted colors, putting more of an emphasis on the Phantom's secret hideaway and the consequences of his isolation. Like the 1943 version, it shows the Phantom as a creative soul who is robbed and disfigured due to the venal and banal individuals who steal his life's work for their own personal, vainglorious reasons, to inflate and disguise their own limitations. (The 1962 version is also available to stream on Peacock.)

(There are echoes of these monstrous actions, by the way, in Peter Schaeffer's brilliant stage play Amadeus, adapted into a film and directed by Milos Forman. Poor Mozart is not concerned at all about his fame or position in society, while Salieri is preoccupied with those concerns.)

Brian De Palma's Phantom of the Paradise, which he wrote and directed, brings those ideas into the present day (i.e., the early 1970s). Mega-successful Swan (Paul Williams) recognizes the talents of unknown composer/singer Winslow Leach (William Finley) and promptly steals them, intending to discard Leach and take personal credit for his incredible work.

Differing from past big-screen versions, De Palma makes Swan the lead character; he's evil, sure, but he's also charismatic, has a great smile, and does certain things very, very well. (For example, we see him in the studio, punching up a voice track featuring Winslow's horribly disfigured vocal chords with the graceful dexterity of a magician; he knows what he's doing.) Swan is a different kind of monster, one that reflects the era: as powerful as he appears to be, he's still answering to a higher power yet, one that is even more diabolical, yet remains unseen.

The film remains rather fabulous; its sly, satiric side has aged well, and its happy mocking of the theatrical rock and rock stylings of the day bring back a lot of memories. Somehow, what stands out most for it is the introduction of Jessica Harper, who is more than fabulous: she is a star.

The character is a mainstay in Phantom movies; here, she is called Phoenix, which may be too on-the-nose, but it's a perfect description of her personality, as she performs songs beautifully, boldly dances across the stage like Mick Jagger, and reveals hidden depths to a woman who is seduced by stardom. (Our own Zach Gayne talked with Ms. Harper about the film, which is worth another read or two, and reminds me that my own current hometown served as a key location.)

Fitting nicely into De Palma's oeuvre between the slashing horror flick Sisters (available to stream on The Criterion Channel and considered on Blu-ray by our own Michele 'Izzy' Galgana) and the lushly unsettling Obsession (which I loved more than Ms. Galgana), the playful pop force behind De Palma's Phantom of the Paradise makes it an enduringly alluring tale of monsters, especially the ones who have all the power and don't really know what to do with it, except boost their own forgettable careers.

The film has been available in a variety of home-video editions; mine is a Blu-ray from a French company some years ago. In the U.S., Scream Factory offers a Collector's Edition on Blu-ray.

Do you feel this content is inappropriate or infringes upon your rights? Click here to report it, or see our DMCA policy.
Brian De PalmaJessica HarperPaul WilliamsUSWilliam Finley

More about Phantom of the Paradise