As A Dark Dark Man, a steppe upside-down caper of corrupted police and perverse strongman, premiered in San Sebastian, Yerzhanov was already finishing his next project. Yellow Cat, a playful title referring to a rather sadistic practice, is the closest to a comedy although the director´s unmistakable existentialist bent is not buried that deep underneath the laughs.

Yerzhanov exchanges abuse and piling injustices of A Dark Dark Man for less drastic and seemingly more naïve fare. Yellow Cat follows a comparatively hapless protagonist on a quixotic quest. Whimsical absurdness and zany escapades accompany Kermek, an ex-con released from prison who jumps into the life of freedom with both feet forward. 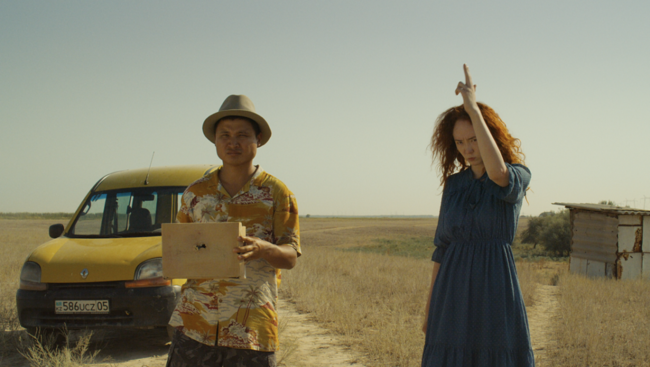 As soon as he reaches a local ramshackle grocery store after the release, he lands a job of opening plastic bags. The crucial thing is to open them fast enough so that the customers would not have to wait long in a queue. Kafka meets Buster Keaton, Yerzhanov´s signature deadpan delivery of an absurdist situation sets the tone for the rest of the film.

The rural village where Kermek plans to lead what approximates to normal life is heavily infested by crime and corruption, local mobster wielding seemingly boundless power. While these aspects are the same for A Dark Dark Man and Yellow Cat, the former is a thriller leaning toward social horror while the latter is a bittersweet comedy depicting the same kind of hopelessness albeit packaged into gullibility. Yerzhanov allows himself to run wilder, Kermek dodges run-ins with a local mobster and his henchmen in a slapstick manner of a loveable fool.

Yellow Cat demonstrates familiar traits, the protagonist being modeled upon prevalent folklore and fairy tale figure. The characters tend to have a "dull" or "stupid" attribute referring to their common sense and streets smart in overcoming obstacles in life. Kermek´s character underwent an actualization; he happens to understand the world in simple terms. 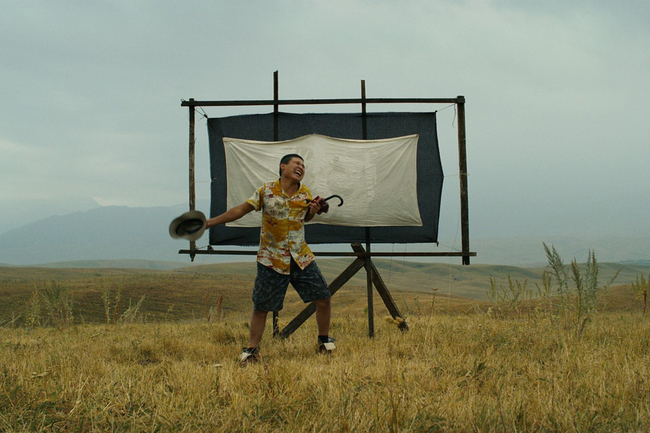 His childish zeal and naïve confidence propelled him through the trappings in an oppressive and exploitative environment infested with corruption. It a Forrest Gump figure on a ludicrous mission to build a cinema in a god-forsaken wasteland.

Yerzhanov equips Kermek with a gun and he even rescues a damsel in distress which becomes his platonic love interest and sidekick, Eva - a whore-with-a-heart-of-gold. The Kazakh filmmaker´s iconoclastic reputation precedes him and he inverts familiar tropes with his signature waywardness. Eva, as it turns out, shares much more with Kermek than anybody else as her ethereality is the result of her Peter Pan-like syndrome.

Two dreamers rejoice and waltz happy-go-lucky towards the chimerical aspiration come hell or high water. In a sense, Kermek and Eva´s dedication is inspirational, a page from a self-help book about dedication and (toxic) optimism (and self-delusion). And this less abrasive tone of the film makes Yellow Cat one of the most accessible films to a wider audience from the unique vision of Adilkhan Yerzhanov. 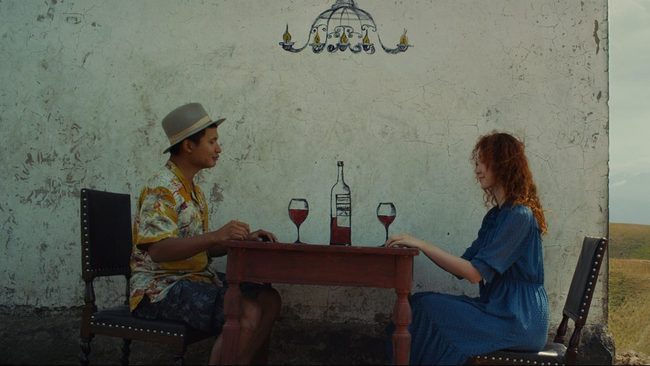 Yellow Cat is Terrence Malick´s Badlands being reimagined by Roy Andersson with a little bit of that reputed Kafkaesque existential sense of humor. Absurd, nonsensical, and slapstick, Yerzhanov´s story of two idealistic fools on the run in a corrupted world is pretty germane allegory until it isn´t a metaphor anymore.

The film enjoyed its world premiere at the 2020 La Biennale di Venezia.

Do you feel this content is inappropriate or infringes upon your rights? Click here to report it, or see our DMCA policy.
Adilkhan YerzhanovKazachstanVenice 2020Yellow Cat