Toronto 2020 Review: ONE NIGHT IN MIAMI, A Vibrant and Provocative Debut 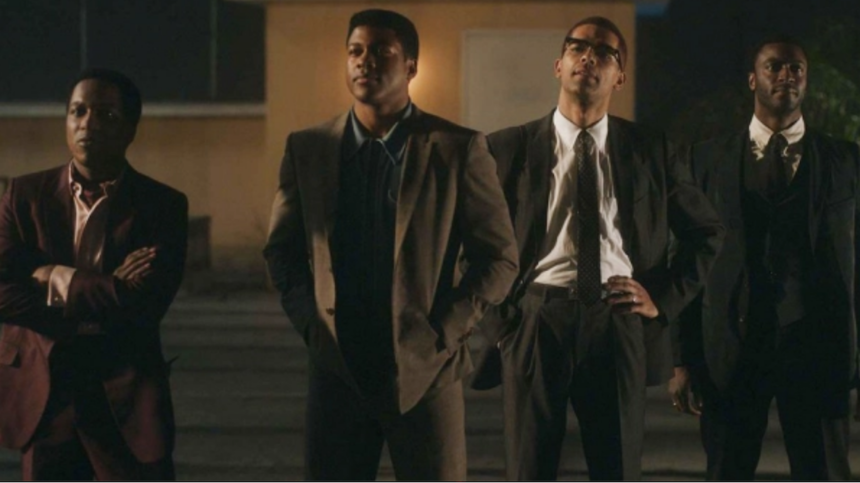 We've all had those 'what famous dead person would you like to have dinner with' or 'what famous people would you love to see having a conversation' moments, when ideas of what we think a famous person is, and how they would express themselves, would run rampant through our imagination. But playwright Kemp Powers took this to a much higher level in his play One Night in Miami, about a famed meeting between real-life friends Jim Brown, Cassius Clay, Sam Cooke, and Malcolm X. In her directorial debut, actor Regina King puts the award-winning play on screen, creating a story that is as joyous as it is intense, peeling back the layers of these complicated men as each are on the precipace of enormous change: personally, professionally, and in their political identity.

It's February 1964, and Cassius Clay has just defeated Sonny Liston to become the heavyweight champion on the world. He heads over to the famed Hampton House hotel with footballer Jim Brown, to meet with their friends, singer Sam Cooke, and activist Malcolm X, to celebrate the victory. Of course, with Malcom being a devout Muslim, there's no alcohol in the room; regardless, the conversation flows from each man's next career move, to the responsibilites of Black men in the public eye, to money, to power.

While these four men were friends, and this meeting did take place, what was actually said is speculation; what Kemp brings to his script, and how King augments it for the screen, you would almost think we were watching a perfect reconstruction. I write 'almost' as a compliment, as such is the power of cinema that the perfect beauty of this night is captured - perfect in that beauty always has edges of pain and sadness. Some scenes are moved to spaces other than the hotel room, benefiting from the film medium, and giving the story the scope it deserves of how these men are a part of the world around them, for better and worse.

The conversation, which begins over (as they note ironically) vanilla ice cream, reveals that Cassius is shortly announcing his conversation to Islam. Jim and Sam balk at this somewhat, but then each of them has their own cliff-edge to walk on; Sam is being criticized pandering and playing too much to white people, Jim is considering giving up football for acting, and Malcolm is at odds with the leadership of the Nation of Islam. As the night goes on, they all confront each other on the choices they have made or are about to make.

This is the beginning of an era when the phrase 'Black Power' would be heard more often. Malcolm challenges Sam for his lack of political will, whereas Sam sees himself fighting the system from within. Cassius (on the verge of becoming Muhammad Ali) is still brash and young, and only just learning that he must fight the white men who would keep him as nothing but a muscled body for their wealth and amusement; for Jim, they are all just 'gladiators', and he will go where the wind takes him; if he is going to be used, he'll at least enjoy it. As their conversation turns to their treatment by white Americans, to the women in their lives, to issues of religion, money, and power, they lay most of their cards on the table for debate, while still keeping that little bit back out of fear, feeling the need to show either a quiet strength or a nonchalance that belies the seriousness of their situations.

Playing people as famous as these four could have been a minefield; but this is a perfectly cast film, with the performers melting into their characters, showing us their complexities and nuances, eschweing imitation in favour of depth. Kingsley Ben-Adir's Malcolm X seems strong and calm, thoughful in his arguments, but the move he is about to make will be not only scandalous, but dangerous; Aldis Hodge's Jim Brown no longer has time for anyone's bullshit, and has decided to take advantage of any opportunity, subverting the white man's expectation of obedience; Eli Goree's Cassius Clay is pumped full of young energy, knowing he has yet to reach the height of his power, but starting to feel the weight of responsibility of that power. Leslie Odom Jr.'s Sam Cooke shows the silky-smooth crooner on the surface; but scratch a little, as Malcolm does, and there is rage beneath, a rage that he will soon channel into more overt activism.

King allows the audience to be more than just a proverbial fly on the wall; she shows these men in some of their most private moments, luring us in with some sumptuous production design and novetly, then asks us to take a seat while were hear conversations that are as uncomfortable as they are revelatory. Particularly for Malcolm and Sam, this is about how they, as Black men, can use what power they have to affect change, and what form that action will take. That both men will be murdered within a year sits at the back of our minds, especially as we see the decisions the four men take after this night, knowing what's in store for their lives, and the indelible mark all leave on American history.

Brilliantly crafted and moving like a perfectly-oiled machine, endlessly watchable (I could have listened to these four talk for hours), One Night in Miami is a trememdous debut from King, full of joy and anger, deliberate in its examination of these extraordinary men, not pulling any punches, and bringing us along for an incredible, thoughtful, and intelligent ride.