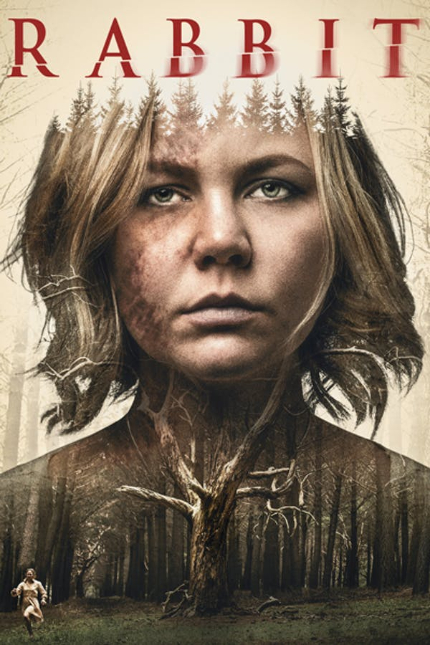 Luke’s Shanahan’s twisted twin sci-fi thriller Rabbit is a bold and confident debut feature with wonderfully detailed small moments and plot twists that recall some of the best in psychological horror.

The film has a focused idea of how it wants to presents things, and whether it will adhere to genre conventions or subvert them entirely. I was reminded of German auteur Michael Haneke’s austere and mundane horror. However, Rabbit is in conflict with its artistic vision and its need to entertain.

With striking, wonderfully employed credits, Rabbit cuts between the twin protagonist(s) Maude/Cleo’s desperate predicament as they flee something in the lonesome Adelaide country. Adelaide Clemens (Rectify, Silent Hill: Revelation) plays both twins but the film occupies itself predominantly with Maude’s life.

We soon learn that her twin died and a year later, in education abroad (pay attention to where) Maude collapses of a terrible heart ache. The first half of the film is an uncanny meandering journey through a suburbia whose veneer of normalcy peels wonderfully thanks to the stilted and strange performance of her parents. A lot of these scenes are quite mundane, and the tedium of a reaction shot, close-up set-up with a lot of unnecessary dialogue begins to grind the momentum of the mystery the film has excitingly set-up.

Regardless, Adelaide Clemens is compelling and captivating as the traumatised, physically pained and scheming Maude. She scrambles to convince herself she is sane while on a sojourn to where her sister was last seen, convinced she still lives.

The other players in this story include sister Cleo’s partner Ralph (Alex Russell, Chronicle), and sabbatical detective on the case, the disgruntled Henry (Jonny Pasvolsky, Westworld). Both men’s desire to aid the twin are called into question, but the impact of their role in the story would have landed harder with a sharper edit.

As the trio progress into gypsy communal territories, characters not unfamiliar in a David Lynch film shake the sanity of all three, and as Maude thinks she is getting closer to her sister, she meets an overly friendly bohemian couple… Veerle Baetens (The Broken Circle Breakdown) plays Nerida, the bohemian wife who delivers one of my favourite performances in Rabbit, but the supporting cast are darkly quirky, devoted and strange enough to linger in the memory also.

It is not only from the violent flashes to her twin being subjected to torture somewhere that jolts the pace of Rabbit, it is also the unbelievable score; Michael Darren assaults with distorted doom-laden electro mixed over classical music, it follows, although strangely, into some boring moments. The music still engages but the scene does not. When it works however the score and its sudden complete absence as it instantly halts is powerful.

The music accompanies towering trees and shadowy yet light interiors in Adelaide both suburban and country; including an austere mystery-filled manor, is made more the uncanny from the meticulous cinematography from Anna Howard. The lens plays with the small details such as lingering on a petrol station bathroom door as it shuts quickly, only to catch itself, and these moments are a welcome creative jolt from the stilted dialogue-driven scenes that lose some of the films intrigue.

Rabbit weaves an assured yet eccentric tale; the film borders on science-fiction and horror although it is neither, it is committed to telling this personal story of these two sisters yet bizarrely includes gardening conversations which do nothing to further the plot. The resolution of Rabbit is still something of a brilliant conversation piece however, and definitely worth the possibly unnecessary handful of scenes peppered throughout this smart and brilliantly shot mind-fuck.

Review originally published when the film celebrated its world premiere at the Melbourne International Film Festival in August 2017. Rabbit is now streaming on Shudder in the U.S. and on Shudder Canada.

Do you feel this content is inappropriate or infringes upon your rights? Click here to report it, or see our DMCA policy.
adelaide clemensAlex RussellAustraliaLuke ShanahanmysteryShudderVeerle Baetens