The new 4K restoration is touring cinemas and digital platforms now, but you want this in your collection. 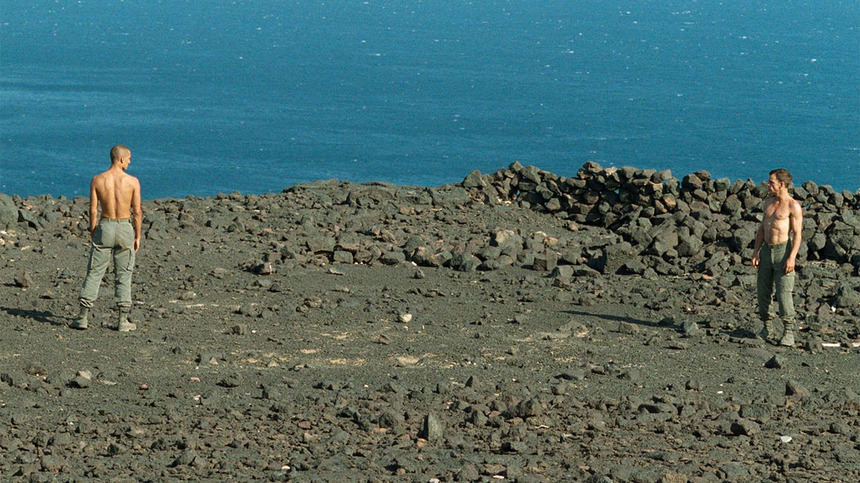 The first time I saw Claire Denis' Beau Travail -- at a Cinematheque Ontario screening, which must have been long enough ago that it was before the TIFF Bell Lightbox -- I was convinced throughout, and for quite a while afterwards, that I hated it. Languid, intense, dependent more on movement and musculature than the featherweight rubric of its plot, Beau Travail doesn't so much reward a close reading as outright deny the need for such. Naturally, within a night (or a dream) of its final moments, I realized it was one of the best films I'd ever seen.

The story, such as it is, dwells on a battle of wills between three men in the French Foreign Legion, that ancient colonizing force, here stationed in East Africa. Galoup is the prideful sergeant; Sentain is the upstart hero; Forestier is the fatherly commander. The reason for Galoup's instantaneous dislike of Sentain is not dwelled upon, though one will make what one wishes of the overwrought homoeroticism throughout. (I certainly did, the first time; watching Beau Travail again for this review, however, I found that "solution" more than a little bit facile and irrelevant.)

The films jots back and forth indiscriminately between a "present day" where Galoup has been cashiered out of the service, and the events in Djibouti that lead to his disgrace. Denis' study, however, has far less to do with the undemanding drama of these men's lives and more with how they move, behave, and push off one another, resembling more and more natural forces of the earth than men.

There is something particular and fascinating about the way Denis observes and characterizes these men, her subjects: frequently portrayed in abstract groups, engaging in ritual behaviour that becomes more and more disconnected from realistic military exercise as the film goes along.

Denis has made science fiction (last year's excellent High Life) and horror (the werewolf romp Trouble Every Day) and in Beau Travail, this female director, turning her lens on the bodies and movements of the men in Galoup's platoon, may just as well be photographing aliens -- in the desert from Planet of the Apes, perhaps, millennia after the end of our pandemic-stricken world. It's one of the most unique inversions of the camera's gaze in cinema. Denis creates an unnerving disconnect between the pleasure of these forms (and there is plenty of that) and the apocalyptic purposelessness of their behaviour. Naturally, Galoup's need for that behaviour -- the formalism, the structure, the code -- will devastate him before the film is over.

Set against brooding opera music and otherworldly ambient noise, we watch the legion train and perform in stark wastelands, in movement that seems less like maneuvers and more like interpretive dance as the tale marches on. (Indeed, much of it was choreographed as ballet.) Colours are stark and vivid; skies are blinding. Always formidable in the musical arena, Denis' nonetheless excels here, and the soundtrack -- both orchestral and contemporary -- is sublime throughout.

The emotional, non-narrative assault on its audience shatters the storytelling covenant, and Beau Travail becomes as unrelenting as the tides of an endless sea, building to a final sequence of images that are as transcendent and purposeful as anything ever put on film. Beau Travail is not a movie to be watched; it is a full-blooded inhabitation of cinema.

Since that day at the Cinematheque, Beau Travail has often topped my list of films I'd like to see join the Criterion Collection. They took their sweet time with it -- this is spine #1042 in a collection that recently came under fire for its decades-long under-representation of both women directors and Black directors -- but thankfully, the disc is a marvel.

Key to its success is a stunning new 4K transfer and restoration of the film. If a freshly-struck 35mm print of Beau Travail ever looked this good, I'd honestly be surprised. Making relentless use of extremely limited colour palettes -- a tableau of the legion working near the sea might be made entirely of slate grey, Windex blue, army green and ruddy skin -- Denis' compositions look extraordinary here. Even the disc's navigation menu flits between three or four shots that could be framed and mounted on your wall.

Detail is crisp and exact, with little or no artifacting, and colour definition is superb. The suffocating greens of Galoup's post-court martial exile fade seamlessly into and out of the crystal-blue sky and buff desert in the Djibouti sequences. Pulsing nightclub scenes, lit with strobing coloured lights, feel humid. (Younger cinephiles coming to Beau Travail for the first time will notice and enjoy this film's influence upon Mati Diop's Atlantics, also due soon from Criterion.) The sound mix makes maximum use of the shock of pounding, 90s electronica against the more somber outdoor sequences.

Girish Shambu's accompanying essay does much to package the concerns of the film, particularly against the colonialist critique that seems inherent to Denis' invocation of the Foreign Legion, and her treatment of the film's only female characters -- all local East African women, one of whom Galoup is seeing -- as a kind of chorus of witnesses. There is also a scene-specific commentary track by Denis' cinematographer, Agnes Godard, and newly-recorded interviews with Grégoire Colin (Sentain) and the marvelous Denis Levant, who played Galoup.

The heart of the featurettes, however, is a newly-recorded conversation between Denis and her filmmaker "superfan," Barry Jenkins (If Beale Street Could Talk). Paired with the hyperconscious tactility of the feature film, the conversation's direct address of the moment in which it was made -- on videoconference, in the early days of the pandemic, and mere hours after the protests began following the murder of George Floyd -- is startling.

The conversation contextualizes Beau Travail almost immediately as a work with great contemporary currency, even if it was made over two decades ago; in their meeting of the minds, Denis and Jenkins couldn't be better paired to discuss the dream-logic of filmmaking as art, and how it both describes, and resists, the society from which it emerges.

The film is now available on Blu-ray and DVD from The Criterion Collection in separate editions. 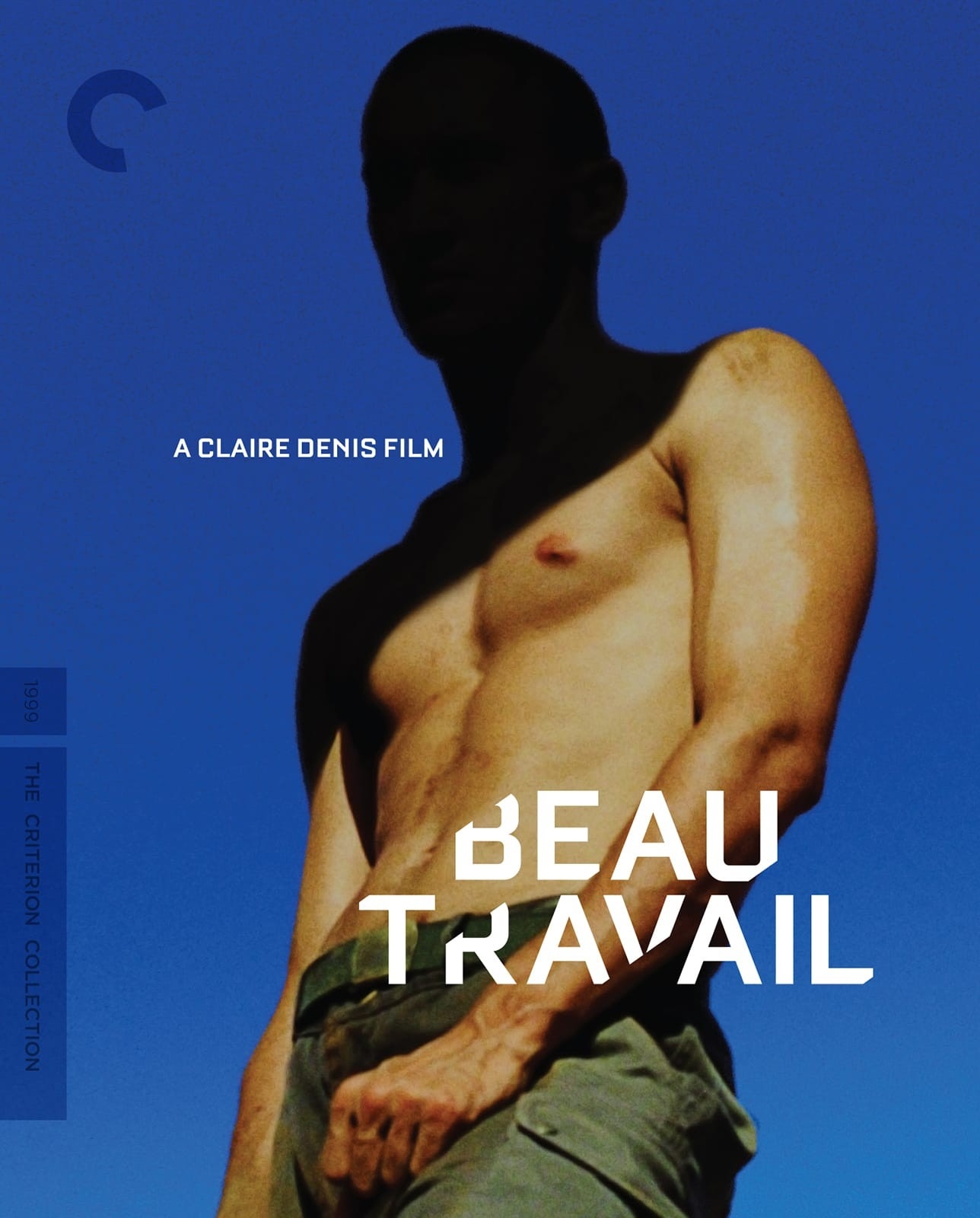