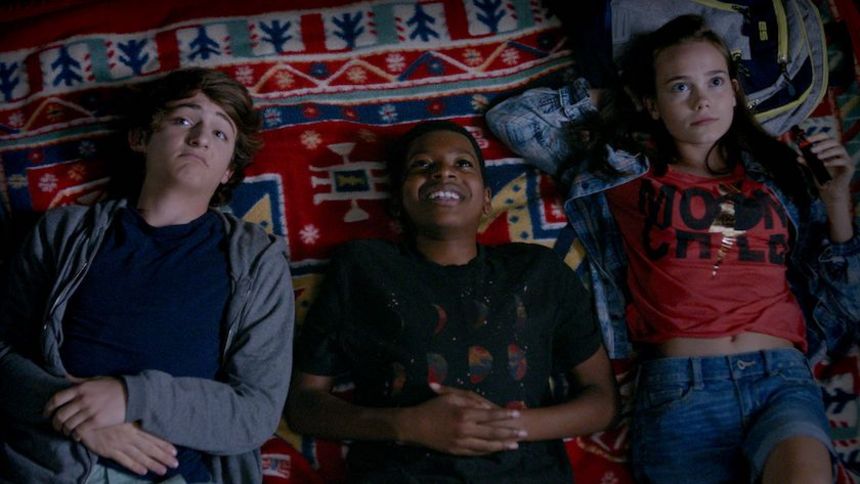 High school can be a major drag and/or bummer, especially if, like Marcus Jackson (Jordan Hall) in writer-director Ben Hickernell (A Rising Tide, Backwards, Lebanon, Pa.)’s latest film, What We Found, you’re a typically nerdy, height-challenged unathletic freshman attempting to dodge the slings and arrows of outrageous fortune in the form of steroid-fueled bullies and general uncoolness.

It’s made all the worse for Marcus and his two best buds, Holly (Oona Laurence) and Grant (Julian Shatkin), decide to become their own Scooby gang and investigate the not-quite-mysterious disappearance of an older classmate and Marcus’ onetime babysitter/casual crush object, Cassie (Georgia Whigham), and get into all kinds of potentially life-threatening trouble.

What We Found, though, doesn’t move into the procedural aspect of the story until well into the second half, foregoing the inherent tension and suspense in Cassie’s disappearance (the who, the what, the where, and when, not to mention, the how), for an over-familiar coming-of-age tale centered primarily on Marcus and his trials and tribulations as a teen entering high school. The son of a single mother/nurse, Alex (Yetide Badaki), Marcus spends most of his unstructured time sneaking out at night to hang with Holly and Grant at the nearby treehouse they built as a trio the previous summer (or the summer before that), waxing eloquent about the science behind blood moons, and sidestepping the fears and anxieties associated with becoming a full-fledged teenager attending a public high school beset by minor and major drug-related crime.

Unfortunately, little in What We Found passes the suspension of disbelief test. The relationships seem forced and contrived (because they are), with little development beyond the usual high-school cliches. While Marcus has a relatively stable if conflicted, relationship with his mother, Holly’s attempting to survive living with abusive parents.

Grant’s the proverbial rich kid, self-centered, narcissistic, and rarely around when Marcus and Holly really need him (until, of course, he’s finally called on his egotistical behavior). Hickernell attempts to turn the trio’s presumably chaste friendship into a romantic triangle later in the film, but it’s as awkward, clumsy, and unconvincing as Marcus’ repeated intrusions into Cassie’s life before she actually disappears from the film.

Marcus and company also have an uncanny ability to find themselves at exactly the wrong place at the worst possible time, another contrivance piled on top of other contrivances littered throughout Hickernell’s screenplay. On his own, Marcus witnesses a drug-related conversation between Marcus’ chief bully and Cassie’s supposed ex, Clay Howard (Brandon Larracuente), and a couple of rough-looking, African-American gangbangers.

Hickernell gets zero points for leaning hard into borderline racist cliches about inner-city crime, all but absolving Clay, the son of a successful criminal attorney, of any responsibility for his actions. Later, Marcus, Holly, and Grant encounter what looks like an unsanctioned burial in the middle of the woods, only to find themselves in the same stretch of woods again a second time or third time in the last act.

With the adults in What We Found all but criminally negligent for leaving their children alone at night, especially after Cassie disappears, it’s almost as if Hickernell isn’t even trying to bring a measure of believability to his film. Besides Marcus’ absent mother (excusable due to her profession), What We Found includes exactly two other impactful characters above the age of eighteen, Katherine Hillman (Elizabeth Mitchell), a senior police detective and lead investigator after Cassie disappears, and Steve Mohler (James Ransone), an ethically, possibly criminally, compromised beat cop.

Until What We Found’s final moments, both play marginal, tangential roles, often disappearing themselves from the central story and popping in as needed. Hickernell doesn’t even bother to reveal Hillman’s personal connection to Cassie until fairly late in the film during a late-night heart-to-heart with her grieving daughter, Emily (Casey Hartnett), when we learn Cassie and Emily were best friends.

What We Found also suffers from the occasional odd line reading (unsurprising given the young cast), but overall benefits from a mix of seasoned pros like Mitchell and Ransone and a young cast led by Hall, Laurence, and Shatkin. Of the three, Laurence has the most experience (30 credits, including The Beguiled, Bad Moms, and Southpaw), and it obviously shows. She gives the most naturalistic, realistic performance of the three leads, giving even the most banal or faux-profound dialogue extra emotional heft or gravity. In another, better timeline, What We Found would be reentered around Laurence and her potentially more engaging character.

The film is available to watch on a variety of Video On Demand platforms as of Tuesday, August 4, 2020.

Do you feel this content is inappropriate or infringes upon your rights? Click here to report it, or see our DMCA policy.
Elizabeth MitchellJames RansoneJordan HallOona Laurence