Now Streaming: THE ONE AND ONLY IVAN, Must Be Kind and Gentle 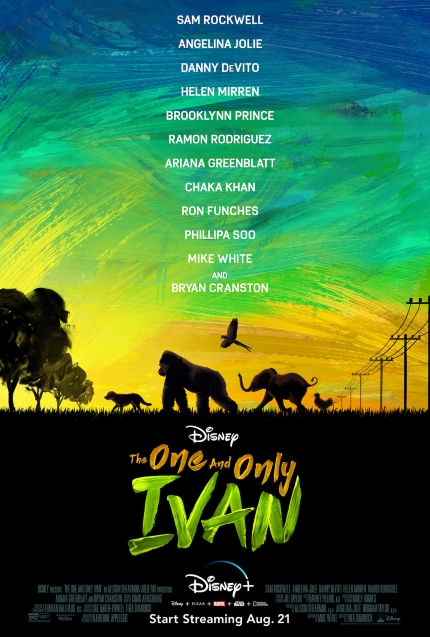 If animals could talk, what would they say about humans?

The One and Only Ivan
Now streaming on Disney Plus.

Raised under the human tutelage of Mack (Bryan Cranston), a silverback gorilla named Ivan is the headliner at a circus under the big top of a shopping mall in Tacoma, Washington, USA.

Inspired by a true story, and based on a novel by Katherine Applegate that was first published in 2012, The One and Only Ivan has been adapted for the screen by Mike White (Year of the Dog) and directed by Thea Sharrock within the comfortably numb confines of a Disney family picture. Photographed by Florian Ballhaus with his customary, expert spit and polish, the film looks fabulous, thanks in large part to production designer Molly Hughes and costumer designer Jill Taylor. It envelopes the viewer like a soothing, lukewarm bath on a cool, but not cold, day.

Unfolding at a leisurely pace, the kind and gentle film appears ideally designed for young children, who may readily soak in the life lessons that are taught about the care and feeding of gorillas and other animals, and how humans have treated -- and, more importantly -- should treat other living creatures that are under their care who do not speak human languages.

Voiced by Sam Rockwell, Ivan claims he has no memory of how he came to live in a shopping-mall circus, which makes him an unreliable narrator. He passes the days by portraying a ferocious gorilla in the daily shows and spends his nights chatting with a stray dog he calls Bob (Danny DeVito), yearning for something different than his humdrum existence.

Ivan appears to have accepted his fate until the day that aging mother elephant Stella (Angelina Jolie) and her young daughter Ruby (Brooklynn Prince) arrive as another bid by Mack to draw crowds to the show. Stella's health takes a turn for the worse, prompting Ivan to make a promise to her on behalf of Ruby that he has no idea how to fulfill.

More than competently directed by Thea Sharrock, who previously helmed the romantic drama Me Before You (2016), The One and Only Ivan may be based on a true story, but the notes it sounds are familiar. Inevitably, it draws comparisons to another circus picture, Disney's live-action Dumbo (2019), directed by Tim Burton and also featuring Danny DeVito in the supporting cast.

Unlike Dumbo, Ivan is earthbound. Though he can't fly, Ivan can do at least one thing that Dumbo could not: Ivan can draw. His drawings may not be masterpieces, but they sure look a lot better than my doodling.

Did Dumbo dream of heaven? I don't recall that from Disney's adventures, either, but Ivan dreams of heaven for at least one character who passes from the scene. This is, I suppose, one of the natural consequences of giving animals the ability to talk in human language to other animals, if not to humans.

What are dreams, after all, if not talking to ourselves in the dark? After watching this movie, I suspect I'll be doing a lot of that in the days ahead.