Seth Rogen stars in the comedy, directed by Brandon Trost, and now streaming on HBO Max. 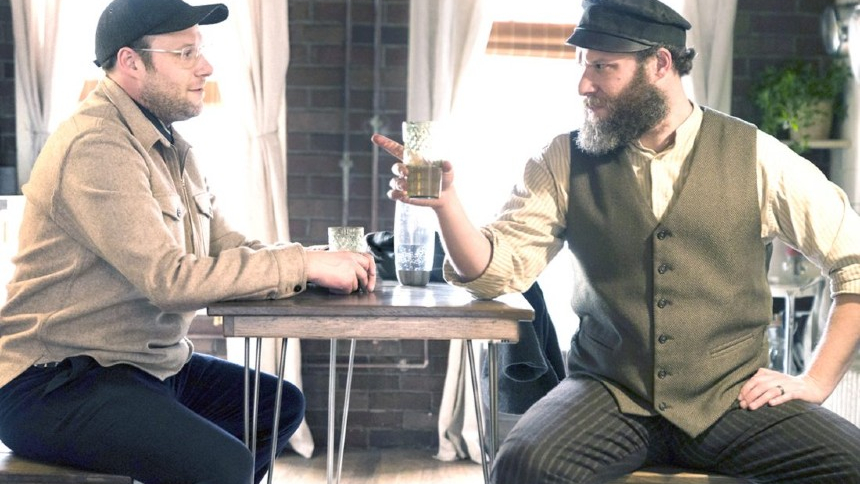 Last seen in a lead role in Jonathan Levine's romantic comedy Long Shot (2019), opposite Charlize Theron, Seth Rogen evidently decided no other actor could equal or top Theron, so now he stars opposite himself in An American Pickle, adapted for the screen by Simon Rich from his own short story, and directed by Brandon Trost.

Cinematographer turned director Trost, making his solo feature debut -- previously he helmed action-comedy The FP (2017) with his brother Jason Trost -- ensures that the comedy looks handsomely photographed by John Gulerasian, and Rogen himself ensures that the comic timing remains ace, even when Rogen plays against himself, no doubt thanks to fine artistry by film editor Lisa Zeno Churgin.

Like a close shave with a dull razor, the comedy is pleasant and diverting without cutting too deep. Herschel Greenbaum (Rogen with a beard) lives a rough-hewn existence in a fictional Eastern European country, brightened only by the love of his life, Sarah (Sarah Snook). One day in 1919, he falls into a vat of pickles; one hundred years later, he is revived.

The vat of pickles somehow kept him alive and prevented him from aging. Upon his revival in 2019, he meets his grandson Ben Greenbaum (Rogen without a beard), who lives off in a tony Brooklyn apartment, thanks to an inheritance from his parents, who died and left him miserable because blah blah blah.

Herschel Greenbaum and Ben Greenbaum are clearly related by blood, which becomes quickly apparent because both are various kinds of miserable, unhappy people who are recovering from deep states of grief, owing to the loss of their loved ones. Thus, the film occasionally threatens to become unbearable, but at least it's frequently funny and sometimes hilarious. And it only runs 88 minutes, including credits.

Do you feel this content is inappropriate or infringes upon your rights? Click here to report it, or see our DMCA policy.
Brandon TrostHBO MaxSeth RogenUS