Review: FLANNERY Works Best As a Primer on Its Subject's Inner Life

A new documentary film by Elizabeth Coffman and Mark Bosco, S.J. explores the life and work of author Flannery O’Connor. 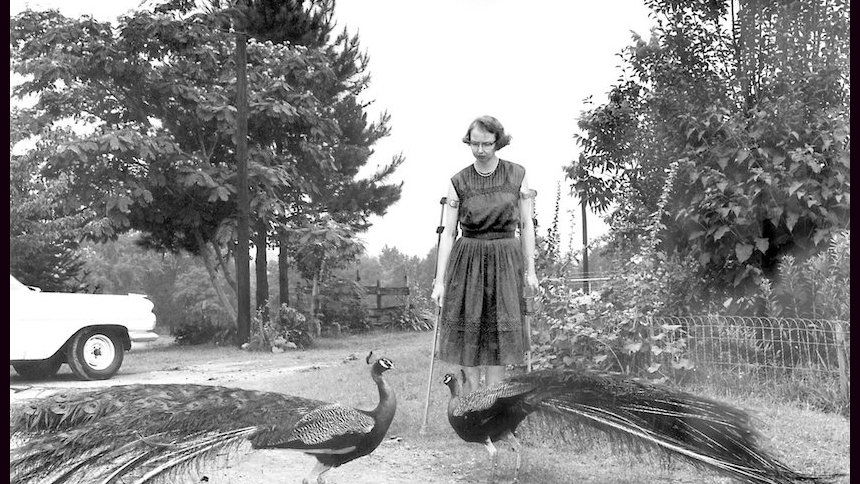 Every artist-based- or -centered documentary faces a similar challenge: Where an artist in question lived a quiet, contemplative life, one filled primarily with adventures of the mind and spirit is involved, how best to portray that life in a medium like film or its close analog, television, that places primacy on surfaces and sounds?

For a writer like Flannery O’Conner, long considered a standout among writers of the American South during the last century and who, debilitated by the lupus that would end her life prematurely at the age of 39, severely limiting her mobility and forcing her to live most of her adult life in Milledgeville, Georgia, the challenge to convey O’Conner's life and work in an engaging, illuminating manner becomes practically insurmountable. For academics-turned-documentary filmmakers Elizabeth Coffman and Mark Bosco, and their biographical documentary, Flannery, it was a challenge well, if incompletely and frustratingly, met.

Like their narrative relatives, bio-docs tend to come in two flavors: (1) cradle-to-grave bio-docs or, (2) a slice-of-life that focuses on a shirt, formative period. Coffman and Bosco also take the road most traveled when it comes to O’Conner, using the familiar mix of archival photos, interviews with friends, family, and contemporary writers, including Alice Walker, Alice McDermott and Hilton Als, O’Conner’s longtime editor and publisher Robert Giroux, writer and professor Mary Gordon, poet, essayist, and memoirist Mary Karr, and actor-director Tommy Lee Jones.

Almost everyone waxes rhapsodic about O’Conner’s talents and skills as a writer, her contributions to the Southern Gothic as a literary form, and, of course, her unique insights into the human condition through her experiences as a woman in mid-20th-century America, her struggle with the lupus that took her father’s life when she was only 15, and her preoccupation with matters of faith, belief, and spirituality as a lifetime Roman Catholic (one of the few in the predominantly Protestant South).

Coffman and Bosco understandably chose the first, generally easier alternative (i.e., cradle to grave), delivering the equivalent of a primer for readers and non-readers alike on O’Conner’s life, albeit in an often limited, cursory manner that sidesteps the complexities and controversies surrounding O’Conner work, specifically O’Conner’s depiction of race, racism, and the use of the N-word in her fiction and in private correspondence.

O’Conner saw herself in part as a sardonic, satirical writer, an honest, truthful chronicler of America’s ex-Confederate states, concerned primarily with relaying or conveying lived experience as she observed eye with her singular vision, yet also consciously with a desire to avoid involving herself in the political entanglements and struggles of her day. O’Conner famously refused to meet James Baldwin in Georgia, arguing that any such meeting would be misperceived and misunderstood by critics on either side of the political spectrum.

As Flannery winds and wends its way through O’Conner’s life, Coffman and Bosco interweave excerpts from O’Conner’s short stories and her first novel, Wise Blood, with animated recreations in the former case — a decision bound to cause discomfort, if not outright confusion, given the often violent, wrenching nature of O’Conner’s stories — and snippets from John Huston’s underseen, underappreciated 1979 adaptation in the latter case, as well as interviews with Wise Blood’s screenwriter, Michael Fitzgerald, and its star, Brad Dourif.

Fitzgerald and Dourif recount several anecdotes about Huston and Wise Blood, none more intriguing than Huston’s statement that “Jesus won” after completing production (Huston was an avowed atheist). That anecdote speaks about the power and persuasiveness of O’Conner’s prose, yet Coffman and Bosco move on almost immediately, leaving the meaning behind the anecdote to linger for viewers to contemplate on their own time.

Ultimately, Flannery works best as a primer on O’Conner’s life and times, and less as an examination or exploration of O’Conner as a key, foundational writer of mid-20th-century America. If, however, Flannery convinces a casual non-reader to seek out O’Connery’s short stories, her novels, or her essays and letters, it’s accomplished its primary task, introducing potential 21st-century readers to an essential, central American writer. Her complexities, contradictions, and controversies, however, will have to be left for another, as yet unmade documentary.