Now Streaming: GIBIATE, A Samurai and a Ninja Fight Monsters 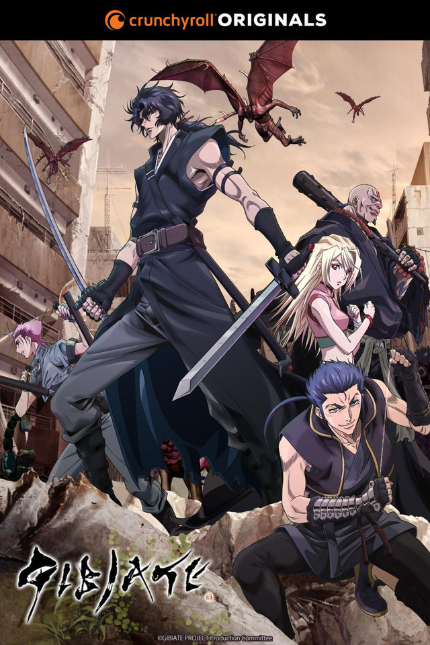 Ever have one of those strange days when you're transported hundreds of years into the future? This is one reason I love anime!

Comfortably hewing to conventions while mixing elements freely to create something entirely action-packed and altogether enjoyable (so far, through two episodes), Gibiate mysteriously transports a samurai and a ninja from the Edo period into the future, just in time to battle a devastating virus that can transform humans into monsters in the blink of an eye.

Written by Aoko Ryo, produced by the legendary Amano Yoshitaka, who created all the wild original character designs, and directed by Komino Masahiko, the original series from animation studios Lunch Box and Studio Elle feels very timely in its opening moments, as a virus infects the world, causing catastrophic destruction due to the sudden increase in a bewildering variety of very angry monsters.

The samurai and the ninja quickly adapt to their unexpected change of circumstances and rally to the aid of a professor who is desperately searching for a cure. The two warriors join the professor's support team, which includes a scientist and her young adult daughter.

The first episode was a blitzkrieg of story and characters, but the second episode makes it more apparent that action will predominate, which is fine with me for a series consisting of half-hour episodes. I'm hoping (and expecting) that we'll learn more about the characters themselves in forthcoming episodes, though if the action keeps up like it has so far, I'll probably be satisfied.

As an anime newbie, what really attracts me to the series is the combination of familiar elements from different sub-genres. I've added it to my watchlist; it's currently scheduled to drop new episodes every Wednesday morning.

Do you feel this content is inappropriate or infringes upon your rights? Click here to report it, or see our DMCA policy.
Amano YoshitakaanimeAoko RyocrunchyrollCrunchyroll OriginalsJapanVRV