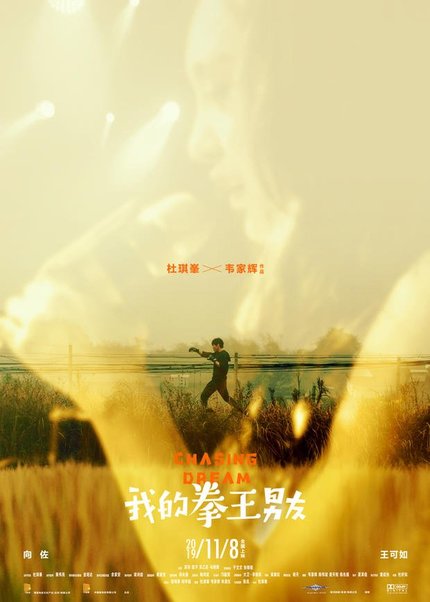 Iconic Hong Kong filmmaker Johnnie To (The Mission, Drug War) is back with his latest film, Chasing Dream, currently making the festival rounds. While To is probably most well known for his gangster sagas over the last two and a half decades (Election, Exiled), he's one of Southeast Asia's most prolific filmmakers, frequently darting between genres since he first hit the scene in the late '80s with a series of broad comedies and goofy horror films. Chasing Dream is no less than the latest evolution of that adventurous spirit, presenting a big hearted MMA themed musical for the modern age.

MMA fighter Tiger (Jacky Heung) is an up and coming force in the octagon, but he's also a foodie with a dream. Nicknamed "The Gluttonous Boxer", Tiger's dream is to start a hot pot restaurant when he retires. At ringside he's cheered on by a crew of pretty ring girls hired to pump up the crowd, among them is Cuckoo (Keru Wang), who happens to be deeply in debt to Tiger's manager, Gao (Bin Zhi).

When Gao sends his prized fighter out with Cuckoo to put the girl to work repaying her debt by giving lap dances and sexy car washes, Tiger catches a glimpse of her singing ability and has an idea. He signs her up for a major TV talent contest, Perfect Diva, with hopes that she can win, therefore getting her out of debt with a little left over for him to retire from fighting and start up that restaurant. However, as one might expect, it isn't quite that easy, and their story gets very complicated, very quickly.

On paper, Chasing Dream, is a very familiar feeling film noir set up. A big galoot protecting a damsel in distress on her way to fulfilling her destiny. Along the way the two fall in love and live happily ever after. To be honest, that's pretty much the crux of it, what makes this version of that old story interesting is To's touch and a certain exaggerated melodrama that is typical of mainland Chinese productions.

The film's runtime is split pretty evenly between Tiger's time in the MMA octagon and Cuckoo's time on stage in Perfect Diva, any time not spent in one of those two locations proves fertile ground for some pretty broad action. To may have spent the last two decades proving how serious he is, but here he reminds us that he started off making movies like Stephen Chow's Justice, My Foot! & The Mad Monk, both of which are incredibly goofy. Chasing Dream revisits some of those very broad comedic moments in his career to varying degrees of success.

The level of melodrama To appears to be chasing tends to influence the execution of what should be some of the grittier sequences, thoroughly confusing the film's tone. For example, each of the film's numerous MMA scenes are pretty bloody, but they also feature a lot of of obvious wirework to accomplish some of the more complex stunts. The cognitive dissonance between what is supposed to an intense battle for survival that is, at its core, basic brawling, and the kind of highly choreographed and wire-laden action we get is a bit off-putting. It's like the film can't quite decide how much it wants us to actually believe.

Cuckoo's time on the Perfect Diva stage is similarly confounding, especially when it comes to the running gag about a competitor of hers who becomes more and more injured with each subsequent performance to a degree that would make your average screwball comedy blush. The tone of the film is so confused that it's hard to get a handle on exactly how much I should care about these characters, even as they try their hardest to make it work.

All that being addressed, Chasing Dream is entertaining, there's really no denying that, it's just kind of a mess at the same time. Near the end of the film, the entire cast bursts into a massive Busby Berkeley style musical number that pretty much encapsulates the anything-goes aesthetic of the whole experience. Even as Heung and Wang do their level best to give their own characters everything they've got, they keep having ridiculous non-sequiturs thrown at them from every angle that make it difficult to take their emotional journey seriously. Would I watch it again? Absolutely, but knowing that I shouldn't expect too much of it and being able to preemptively separate it from To's recent oeuvre would certainly have helped.