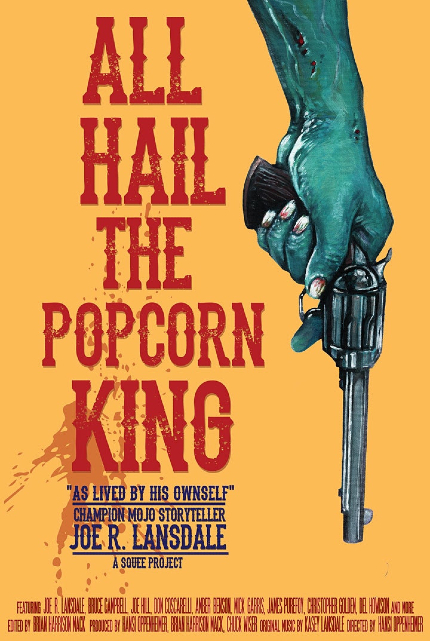 He spins tales that captivate and surprise, whatever their length and form, so it's no wonder that his works served as the source material for great genre screen adaptations, from Don Coscarelli's Bubba Ho-Tep (2002) to Coscarell's Incident On and Off a Mountain Road (2005) to Jim Mickle's Cold in July (2014) to the wonderful series Hap and Leonard (RIP; BTW, Sundance TV will marathon the series, starting on July 6).

A stack of his books sits proudly in my closet. (It's OK, that's where most of the books I've read reside nowadays.) If you have not yet made your acquaintance with this literary dervish, the documentary All Hail the Popcorn King sounds like it will be a good introduction to his person and East Texas personality.

Directed by Hansi Oppenheim, the film "paints a vivid picture of award-winning author and screenwriter Joe R. Lansdale (Bubba Ho-Tep, Cold in July) in what's been described as a 'five star' film (GrimdarkMagazine)," according to the press release, which continues below.

The film has been "touring the country" recently and will gain wider release in the coming months. For now, watch the trailer below, and then visit an online bookstore so as to order one or more of his many books. Visit the writer's official site to read a sample and learn more.

Do you feel this content is inappropriate or infringes upon your rights? Click here to report it, or see our DMCA policy.
documentaryHansi OppenheimJoe R Lansdale