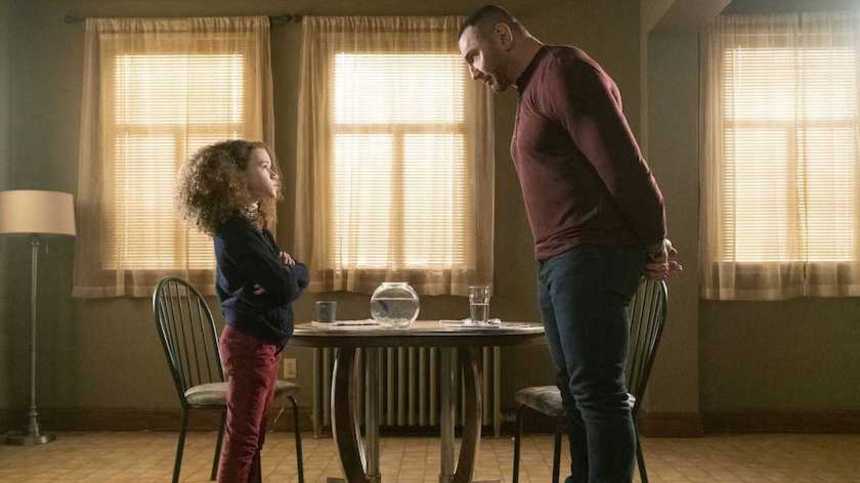 From one of the hardest working performers in professional wrestling to one of the hardest working actors in Hollywood (19 film appearances in just the last six years), modeled on Dwayne Johnson’s trajectory from pro wrestler to movie star, Dave Bautista has carved out a career in front of the camera worthy of its own, standalone biopic. Until (and “if,” of course) Bautista gets a lightly fictionalized, big-screen biopic of his own, he can count on a surprisingly expansive series of high-profile acting roles in practically every genre.

That’s My Spy’s central, possibly only, joke: JJ reacts with extreme prejudice, not to mention excessive force when a much lighter, more subtle, less body-count-heavy approach might have been needed for the op. But for JJ to come to that realization, not to mention My Spy’s most important theme (“people who need people need each other”), he needs a wake-up call of suitably impressive proportions.

All but demoted and exiled to a surveillance op with his Number 1 CIA Fan, Bobbi (Kristen Schaal), in Chicago, JJ gripes, grumbles, and pouts about his newfound status. Their mission to collect intel on the surviving family of a newly dead arms dealer, Kate (Parisa Fitz-Henley), a medical doctor, and her preteen daughter, Sophie (Coleman), goes awry within seconds when Sophie, far more sophisticated than JJ or Bobbi could have possibly imagined, finds the carelessly hidden cameras in her mother’s apartment, tracks JJ and Bobbi back to theirs via an open WiFi signal, and gives JJ the ultimatum that gives My Spy its title: Show Sophie the ins and outs of spy-craft (minus firearms) and accompany her in random activities in Chicago in exchange for her continuing silence.

The usual assortment of cliched, predictable complications ensue: JJ discovers something of a kindred spirit in Sophie, begins shedding his metaphorical armor, and thanks to Sophie’s calculated interventions, begins a tentative, tentatively chaste romantic relationship with the still emotionally fragile, recently widowed Kate. But where there’s a Big Lie (JJ’s true identity), there’s a third-act reveal that threatens to break the promise of domestic bliss that will elevate JJ from his perpetual funk and help him gain the insta-family he didn’t know he wanted or needed.

The ongoing plot of Kate’s ex-brother-in-law, a completely irredeemable black-market arms dealer, occasionally rears its head, mostly as a reminder to audiences that JJ will have to slip into action hero mode by the time the third act comes around. At minimum, the action-heavy third act gives Bautista a welcome chance to exploit the physicality he’s honed as a professional wrestler over the better part of two decades along with the comic timing he first showed in Guardians of the Galaxy I-II and Avengers: Infinity War.

As JJ’s pint-sized apprentice, Chloe Coleman acquits herself reasonably well, oscillating from grounded naturalism to Disney Channel moppet and back again with the facility of a more seasoned performance. Thankfully, she modulates her performance just enough so it doesn’t cross over into intentionally annoying (a major plus for an all-ages family action-comedy).

Kristen Schaal delivers a familiar, if not necessarily objectionable, performance as JJ’s slightly neurotic, hyperactive partner, but it’s a small, underwritten role that rarely gives her much to do besides acting as JJ’s Number 1 Fan or his Number 1 Critic. Parisa Fitz-Henley probably has the more difficult role: She has to play Kate straight, smart, and clever, but also somehow oblivious to JJ’s true identity or Sophie’s machinations. Fitz-Henley’s performance perfectly complements not just the other members of the cast, but a film that works incredibly hard to deliver inoffensive, unobjectionable, escapist entertainment and almost succeeds.

The film begins streaming on Amazon Prime Video on June 26, 2020.

Do you feel this content is inappropriate or infringes upon your rights? Click here to report it, or see our DMCA policy.
Chloe ColemanDave BautistaKristen Schaal