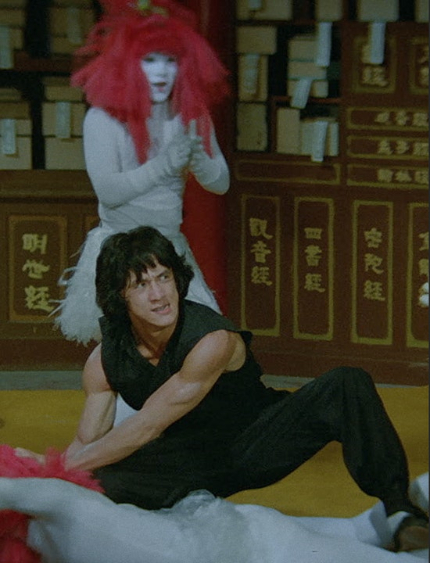 Welcome, friends, to the true New Age of Streaming.

Back in the day, which is to say the dawn of the 21st century, or, A.D. After Rush Hour, some fervent film fans would gaze longingly at nifty new Criterion Collection DVDs, which were much cheaper than new Criterion Collection laserdiscs, and wonder, 'Why can't Criterion release Jackie Chan movies instead of forcing us to import DVDs from Hong Kong so as to enjoy the original, uncut versions of his movies, instead of the stupid Weinstein Co. and their cut, English-dubbed monstrosities?'

Last year, after seeing the news that the Criterion Collection would be releasing Jackie Chan's Police Story and Police Story 2 on Blu-freakin'-ray, I waxed enthusiastic, and I nearly lost my ever-loving mind when I gladly ordered (and paid for) my own personal copy, which I sucked up promptly and happily upon its arrival in my home

And now the Criterion Collection has made those two films available as the centerpiece of a new series on the Criterion Channel streaming service, which is much, much cheaper than buying the movies on Blu-ray. Granted, the picture quality is probably less than what it is on Blu-ray, especially if you have a high-quality, maybe even 4K, monitor that is larger than 32 inches -- not that I'm complaining about my set-up at home -- but the point is that the new series makes some of Jackie Chan's early movies available in their original versions at a reasonable price.

This past Saturday afternoon, I started watching the series, which includes "Introducing Jackie Chan," a fabulous piece of video featuring longtime Asian film expert Grady Hendrix that sets the table for what is to come, which for me was my first-time viewing of Spiritual Kung Fu.

Directed by the great Lo Wei near the end of his career, Spiritual Kung Fu was released in 1978, as Chan was about to break out huge with Drunken Master. Here he is the lowliest new student at a Shaolin temple, constantly getting in trouble in lightly comic vignettes before encountering "a gaggle of ghosts," as the official description says.

The first third of the movie is pure comedy before nicely splitting up between comedy, great extended fighting sequences, and lightly supernatural riffs on the ghosts. It's all pretty harmless, but also pretty fun to watch, and more than diverting.

As Mr. Hendrix says in his intro, Jackie Chan was still figuring out how he could do things differently, while also giving fans what they wanted as he himself gained more creative control. Recently, I saw Young Tiger (1974) for the first time, also available to stream, though on Amazon Prime Video, which makes a good sampler for what he should not do, and clearly he learned a lesson from his experience.

The series, Starring Jackie Chan, also includes Half a Loaf of Kung Fu, which I've seen before but couldn't resist watching again for its tremendous fun third act, which is all fighting and all terrific and looks absolutely wonderful on Criterion. Plus, the series also includes The Fearless Hyena, The Young Master, Fearless Hyena 2, the aforementioned Police Story and Police Story 2, as well as My Lucky Stars, an absolute treasure, directed by Sammo Hung, and which I've only seen on an official, but not so great DVD.

My Saturday afternoons in June are now officially booked.

Do you feel this content is inappropriate or infringes upon your rights? Click here to report it, or see our DMCA policy.
Criterion ChannelGrady HendrixJackie ChanLo Wei