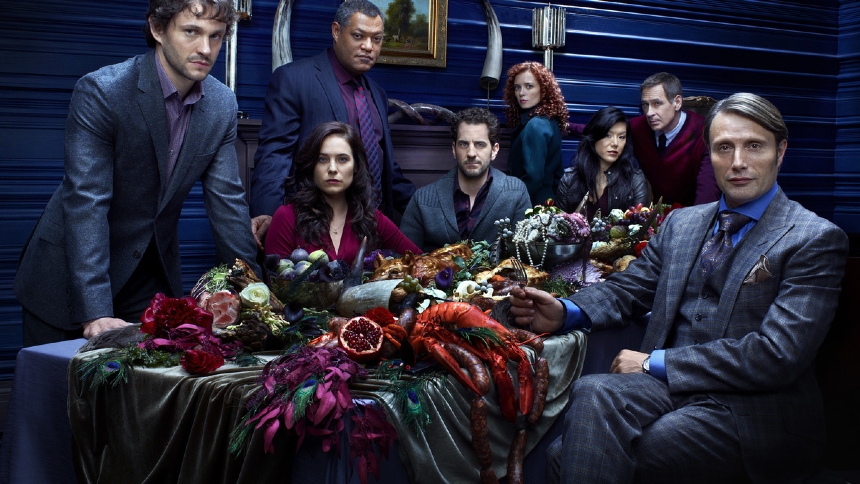 Consider this a public service announcement for fans of deliciously dark and disturbing psychological horror shows that revolve around a cannibal.

Turn out the lights and relive the horror.

Quoting myself from February 2013: "Mads Mikkelsen is good, Mads Mikkelsen can be great, but can Mads Mikkelsen convince everyone that he's Hannibal Lecter, AKA "Hannibal the Cannibal"? Mikkelsen plays the character, created by Thomas Harris in his 1981 novel Red Dragon, in a new U.S. TV show set to debut on April 4. The show, titled simply Hannibal, stars Hugh Dancy as FBI profiler Will Graham, and is an origin story.

"It's set during the beginning of the relationship between Graham and Dr. Lecter, before Graham (or anyone except the audience) learns that the good doc is a serial killer with a taste for human flesh. Laurence Fishburne plays Graham's boss, Jack Crawford. Bryan Fuller (Pushing Daisies, Heroes) is the key creative force behind the show.

"The first teaser has been released, and it keeps Mikkelsen (and Hannibal) in the shadows, which is probably a good idea. Even though Anthony Hopkins was not the first actor to play the character -- that honor belongs to Brian Cox in the first film adaptation of Harris' novel -- he certainly etched an indelible portrait. Mikkelsen will, no doubt, give him a different spin, and he'll be a welcome presence on weekly TV, but obviously much will depend on the stories cooked up by the writers and producers.

"If nothing else, Hannibal will introduce Mikkelsen to a much broader audience in the U.S., far beyond his performance in Casino Royale, and that's a good thing."

Somewhat amazingly, the show remained on the air for three seasons, running for 39 episodes that still left devoted fans wanting more when NBC cancelled the show in 2015, as our own Michele 'Izzy' Galgana discussed. After the show concluded, my elegy covered the history of the character and the show's high points at length.

Now the series is available to stream and so I made plans to binge on as many episodes as possible. After watching one episode, however, I couldn't do it! Our own Andrew Mack wrote about the episode in 2013: "If the remaining episodes maintain this level of quiet intensity, Hannibal could be the surprise standout from all other procedural dramas in the market this Spring season."

The episode is, indeed, bloody good, but reminds me that the show is ideal for weekly viewing: richly evocative, grimly violent, steadily paced, featuring characters who demand closer examination and appreciation, especially Mads Mikkelsen as the not so good doctor. What is good is that the show is available to consume at your leisure, depending upon your appetite for its strong, distinctive flavors.

Do you feel this content is inappropriate or infringes upon your rights? Click here to report it, or see our DMCA policy.
Hugh DancyMads MikkelsenNetflixThomas Harris