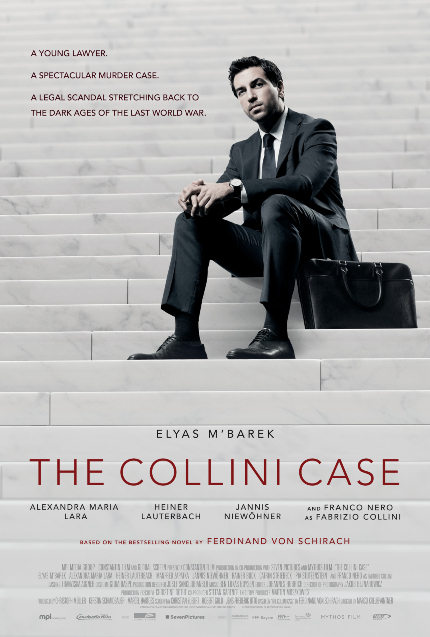 You had me at Franco Nero.

If you need more than that, here's a quick description drawn from the official synopsis: 'Lawyer Caspar Leinen (Elyas M'Barek) is confronted with a spectacular case when he is appointed by the court to defend Fabrizio Collini (Franco Nero), who has been accused of killing a man in his hotel room, seemingly without motive.'

In our exclusive clip from The Collini Case, which you can watch below, we see the inciting incident, and its immediate aftermath. Marco Kreuzpaintner (Summer Storm) directed the taut courtroom drama, which will be available on a variety of VOD platforms as of Friday, June 5, 2020, via capelight pictures and MPI Media Group.

Here are many more official words about the film: "For Caspar, there is much more at stake than his first big case as a defense lawyer. The victim was the grandfather of his childhood sweetheart, Johanna (Alexandra Maria Lara, Doctor Zhivago), and was a surrogate father to him in his youth. In addition, Caspar has an adversary in his former criminal law professor and legendary defense lawyer Richard Mattinger (Heiner Lauterbach, Granny Nanny), who has been appointed the joint plaintiff representative. The case quickly becomes a high-profile event, as Collini refuses to divulge his reason for killing Meyer.

"As Caspar dives deeper and deeper into the case, he not only is confronted with the troubled past of the family he thought he knew so well, but he also uncovers one of the biggest judicial scandals in German history.

"Based on the international bestseller of the same name by Ferdinand von Schirach, The Collini Case is a taut courtroom drama where the sins of the past must be laid bare before they can be forgiven, and the collective guilt of those responsible provides the framework for retribution.

"The film will be available in German with English subtitles or in English with dubbing by actors Franco Nero and Alexandra Maria Lara."

Check out our clip below, as well as the trailer.

Do you feel this content is inappropriate or infringes upon your rights? Click here to report it, or see our DMCA policy.
Alexandra Maria LaraElyas M'BarekFranco NeroGermanyMarco Kreuzpaintner