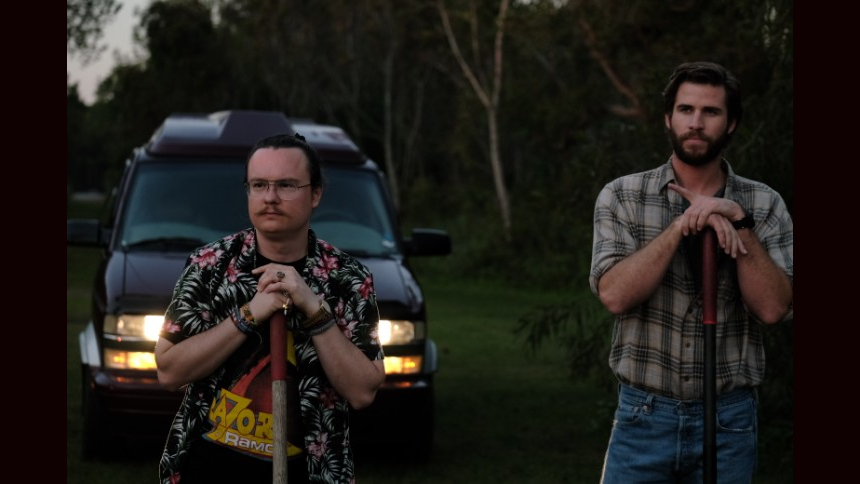 Newly arrived on home video -- Apple, Amazon, and On Demand platforms, plus Blu-ray and DVD -- the dark comic crime flick Arakansas features a plethora of familiar faces, affecting accents and pretending to be tough guys.

Taken straight, I think I would pass, but since it's billed as a 'dark comedy,' it sounds much more palatable. Actor Clark Duke, known for broad comedies like Hot Tub Time Machine, makes his feature directorial debut and also plays a leading role, alongside Liam Hemsworth, Michael Kenneth Williams, Vivica A. Fox, Eden Brolin, and Chandler Duke with John Malkovich and Vince Vaughn.

Those names alone draw my interest. Add to that the source material, the debut novel by John Brandon, which likely gives the film a broader foundation than is hinted at in the trailer. Here's the official synopsis:

"Swin then settles into his day job by taking up a relationship with Johnna (Eden Brolin) against orders to blend in while Kyle continues to question his night job by trying to figure out who Frog really is. Their world is then upended after one too many inept decisions, and Kyle, Swin, and Johnna find themselves directly in Frog's crosshairs, who mistakenly sees them as a threat to his empire.

"Based on John Brandon's best-selling book of the same name, Arkansas weaves together three decades of Deep South drug trafficking to explore the cycle of violence that turns young men into criminals, and old men into legends."

Arkansas sounds like a good title to check out on a sweltering summer day to escape the heat, and/or a lovely spring day when you're sheltering in place in your tiny apartment. Watch the trailer below. See more information at official site.
"

Do you feel this content is inappropriate or infringes upon your rights? Click here to report it, or see our DMCA policy.
Clark DukeJohn MalkovichLiam HemsworthMichael Kenneth WilliamsUSVince VaughnVivica A. Fox