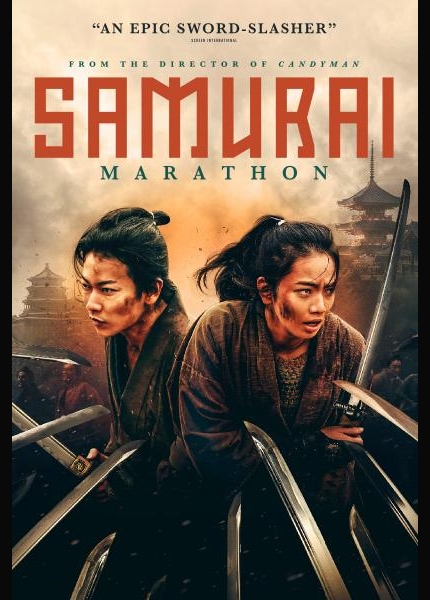 The title, the trailer, and the tone set me on guard to anticipate a heavy-weight drama, especially when it's noted that Bernard Rose (Candyman) directed.

Yet it still left me wondering: Samurai Marathon? Does that mean the film, newly available on VOD, is all about a long-distance race that is run by wandering warriors who are not wielding their swords?

"The visually stunning epic is inspired by a dangerous race established in 1855 that is still held annually in Japan," says the official release. A review by James Hadfield in The Japan Times, however, provides a better overview of the film and its intentions.

"Once the swords start clashing, the race gets rather forgotten, so when the film finishes with a photo montage of legendary Japanese marathon runners, it's a bit disingenuous. As a paean to Japan's athletic heroes of old, Samurai Marathon leaves a lot to be desired, but as breathless entertainment goes, it leaves most contemporary jidaigeki in the dust."

The film is now available on digital platforms, including iTunes and Amazon. More information is available from distributor Well Go USA at the film's official site.

Do you feel this content is inappropriate or infringes upon your rights? Click here to report it, or see our DMCA policy.
Bernard RoseWell Go USA