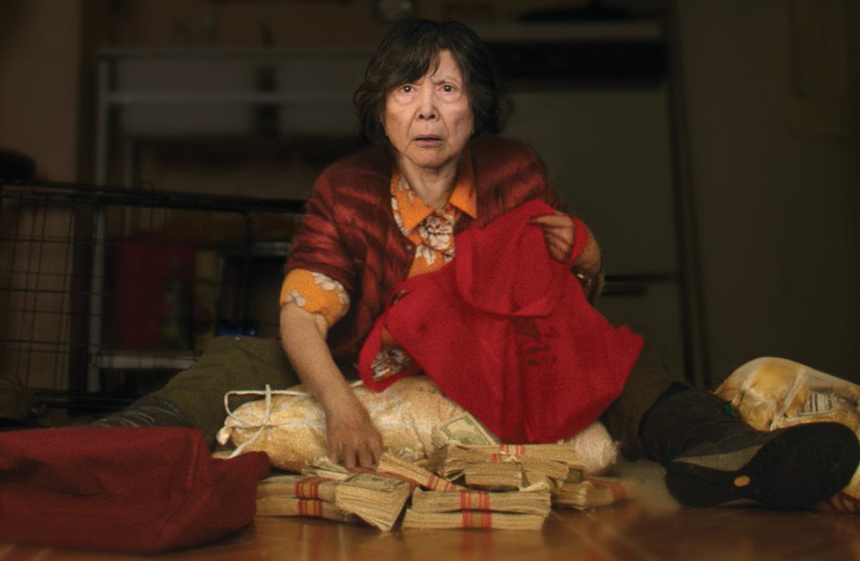 Here in the U.S., we face a long weekend that is typically a great time to head to a crowded theater and see a blockbuster -- if you're into that kind of thing -- or some kind of 'alternative' fare. These are not typical times, of course. That will not deter us from our quest for cinematic entertainment, of course.

Here at ScreenAnarchy, we (usually) favor indie and international 'alternative' films anyway, so here are the most promising titles that we haven't seen yet, newly available to watch via various Video On Demand platforms.

How can you not love the face of an ornery Tsai Chin? She plays a sage woman who has been recently widowed. Her family, naturally, has certain concerns and expectations for her, but she still has her own mind and an iron will. After a fortune teller forecasts blue skies for her, she heads to a casino, gets mixed up with gangsters, hires a bodyguard (?!) and declares war.

Or, has war declared upon her. Or, gets in the middle of a war without a neutral zone. It all sounds like a lot of fun. Sasie Sealy directed; Corey Ha, Michael Tow, Woody Fu, Wai Ching and Clem Cheung also star.

The Haunted
Search for the film on your VOD platform of choice, like Amazon Prime Video.

Surely, the title makes clear the film's intentions, but what will director David Holroyd and his cast do to make the thrills distinctively different? Officially, the description says: "Arriving at an isolated house for her first nightshift, young carer Emily is left alone to face a terrifying vengeful spirit in this disturbingly clever, psychological horror."

Your guess is as good as mine, but if you're in the proper mood, The Haunted may be worth a visit.

Villain
The film is available from Saban Films on a wide variety of Video On Demand platforms, such as iTunes.

Laughing, drinking, angry men. OK, the trailer is straight to the point, and appears to cater to a very specific type of viewer -- one who prizes men who take action and inflict pain and anguish upon others, all with a cheeky sense of humor.

More detail comes courtesy of the official synopsis: "After being released from prison, ex-con Eddie Franks (Craig Fairbrass) wants nothing more than to start a new life. However, his dreams of normalcy are tested when he learns of his brother's dangerous debt to a menacing drug lord. To protect his family, Eddie is forced to go back to his former life of crime and learns that stepping back into this world can have devastating consequences in this action-packed thriller."

THE SERPENT Exclusive Clip: Guns And Cars, Cars And Guns!