LUCKY GRANDMA Trailer: On the Wrong Side of Crime 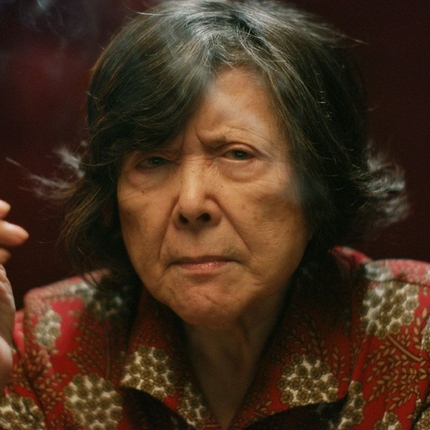 Sometimes it's the people you least expect who have the most cash. And the most trouble! Therefore, from its new trailer, we can anticipate that the titular character in Lucky Grandma will experience a bit of trouble before she can reap the rewards she has earned.

Newly-widowed Grandma (Tsai Chin) may be 80 years of age, yet she is determined to live on her own as an independent woman. One day, "a local fortune teller (Wai Ching Ho) predicts a most auspicious day in her future," according to the official synopsis. Does trouble follow? You betcha.

"Grandma decides to head to the casino and goes all in, only to land herself on the wrong side of luck ... suddenly attracting the attention of some local gangsters. Desperate to protect herself, Grandma employs the services of a bodyguard from a rival gang (Corey Ha) and soon finds herself right in the middle of a Chinatown gang war."

Truthfully, when I first saw the film's title and the great glower supplied by Tsai Chin, I thought Patrick Radden Keefe's brilliant non-fiction account The Snakehead: An Epic Tale of the Chinatown Underworld and the American Dream might have been an influence. Indeed, writer/director Sasie Sealy and co-writer Angela Cheng acknowledged to Oxygen.com that Cheng Chui Ping, aka Sister Ping, was an influence, but it's clear from the trailer that their film is in no way a crime thriller or biographical account of a ruthless, if unassuming in appearance, master criminal.

In fact, the trailer presents the film as more lighthearted than all that, while also suggesting that the dangers associated with the criminal underworld are definitely a threat that should be taken seriously. Lucky Grandma premiered last year during the Tribeca Film Festival and is now heading for release in so-called 'virtual theaters' on May 22, 2020. Enjoy the trailer below.

Do you feel this content is inappropriate or infringes upon your rights? Click here to report it, or see our DMCA policy.
ChinatownHsiao-Yuan HaMichael TowSasie SealyTsai ChinUS