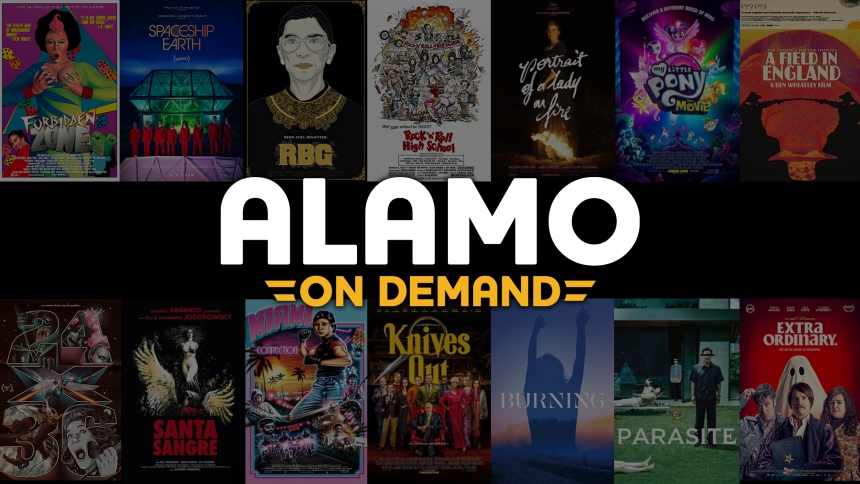 Independent producers, sales agents, distributors and theatrical exhibitors have been scrambling madly behind the scenes to figure out new strategies that can sustain their art and business, while dealing with a huge number of unpredictable, constantly changing variables worldwide.

What that means for consumers (i.e. me, you, and everyone we know) is that we tend to rely upon trusted sources (i.e. friends, family, and every film site we visit regularly) to help us decide what and how to watch. Right now I'm thinking about Alamo Drafthouse in particular, a theater that has become a national chain and a whole lot more. The closest location is barely a mile from my apartment as I write this, and it's closed, and it's been closed since March, and I don't know when it will open or when I might feel like I can go there again.

With their theaters (and almost all theaters across the U.S.) closed, Alamo Drafthouse launched an "Alamo-At-Home" initiative at the end of March, featuring their distinctive programming series (i.e. Terror Tuesday, Weird Wednesday, and more) with a "Virtual Cinema" option, allowing moviegoers to see a variety of films while also supporting local Alamo Drafthouse theaters. As they acknowledged, they were joining a "Virtual Cinema" initiative that was led by distributors including Kino Lorber, Film Movement and Magnolia Pictures.

* While the 'Virtual Cinema" initiative is continuing -- see Kino Marquee, for example -- Alamo Drafthouse has now decided to launch their own new platform service: Alamo On Demand. (* Updated 5/11/20: To be more accurate, the service is powered by the ScreenPlus platform.)

How will this new service seek to stand out? Per the official release, "Alamo On Demand [boasts] a growing library of entertainment for rental or purchase that's been carefully curated by the company's programming team. This new service allows the cinema company, which operates 41 locations in the United States as well as the influential genre film festival Fantastic Fest, to champion innovative and exciting films far beyond its auditoriums."

"Even though we can't gather in theaters right now," says Henri Mazza, Alamo Drafthouse Vice President of Content, Sponsorship, and Events, "our programmers will still be curating new and classic films for our nationwide community of fellow movie lovers, and hosting conversations online as well."

At launch, studio partners include Lionsgate, Magnolia Pictures, NEON, Sony Pictures Classics, and more. I've only spent a few minutes perusing the site, so I don't know exactly how well it matches up against broader VOD services, but it's very promising for indie and international genre movie fans. Currently, for example, highlights include "Fantastic Fest Faves," "Films of Bong Joon Ho," and "Ozploitation." They are also featuring "Six-Packs" at rental prices that are very competitive (US$13.00 rental for six films).

Alamo also points to their plans for the near future: "In parallel, users can expect more deep curation of classic films. For example, later this year, Severin Films will be launching the definitive "Brucesploitation" documentary Enter the Clones of Bruce, about the hundreds of Bruce Lee imitator films that flooded the market after his untimely death. Alamo On Demand will pair the doc with a deep collection of the referenced films available for rental either solo or as a binge package to watch over 21 days."

The Alamo On Demand service feels like a cousin to the Shudder streaming service. Neither will have every genre film you can think of, but is likely to have films you've never heard of before and may want to check out, based on your trust in the curators. This sounds like the more human side of the infamous Netflix algorithms, and certainly bears further investigation.

Check out Alamo On Demand for yourself.

Do you feel this content is inappropriate or infringes upon your rights? Click here to report it, or see our DMCA policy.
AlamoAlamo At HomeAlamo DrafthouseAlamo on Demand