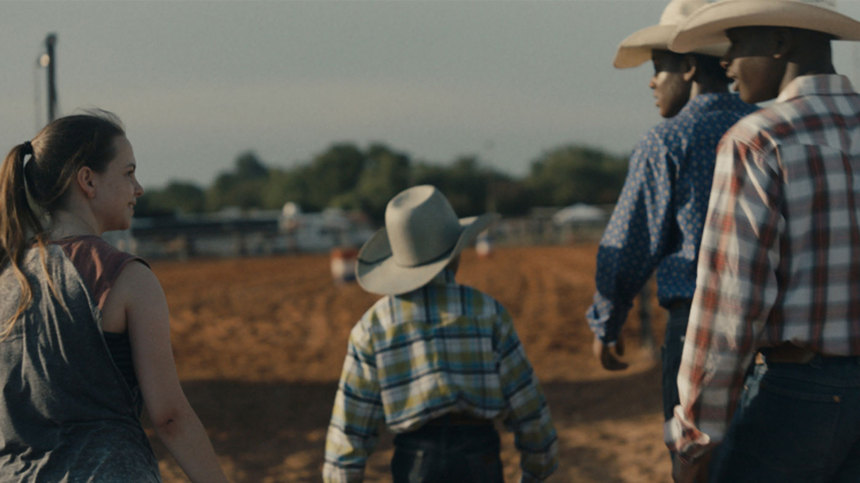 Much of today's naturalist social realism films, especially from the USA, set themselves in the marginalized and rural communities (Winter's Bone, American Honey), looking at those parts of America lost to poverty, unemployment, and drug use. Director Annie Silverstein, a documentarian and formner social worker, looks to such a community in southeastern Texas in her fiction feature debut Bull. Centred on the black rodeo community, and focusing on the unlikely friendship between a middle-aged black rodeo worker and a teenage girl, it follows what has become something of a standard formula for contemporary naturalist films, yet is anchored by two terrific lead performances, and a community unknown to many, yet a huge world of its own.

14-year-old Kris (Amber Havard) lives with her grandmother and younger sister while her mother is in her last weeks of a prison stint. Kris is at an age where she's still unsure about what she wants, but she is aware that her options are few and far between. Flirting is a passtime, though she already knows the dangers of taking it too far; she knows she should be better to her family, but she can't help but push to see how far she can go. She knows she is poor, and prison is likely in her future; her clothes are too big for her, her hair is unwashed, but she moves with a furtive hesitancy mixed with the strength of someone who seeks understanding yet expects harshness,

Meanwhile, Abe (Rob Morgan, Mudbound) is an ex-bull rider, now working late nights at the rodeo he loves. The wear and tear of his profession means his body is older than its years, strained beyond what it should be, and his frustration at not being able ot do what he loves is only tempered by a strong community of young black boys that look to him as an inspiration. But he is tired, tired to his bones, and even occasional nights with his old flame Sheila won't stop him taking painkillers and drinking, knowing his body won't make it many more years.

Trying to impress her fellow teeangers, Kris breaks into Abe's house so they can drink; but she's caught the next day. Kris would rather just go to juvenile detention (as she expects prison is her future, like her mother), but Abe gives her a chance. She has to clean up the mess she made, and do some chores, which she does reluctantly. But she soon discovers Abe's rodeo world, and is fascinated. Here is not only an world in which people form a bond with each other, but one in which she could not only survive, but thrive, if only from having support.

Both Abe and Kris are terse, but then, they both light up when they're around this activity, though Abe's joy is now mixed with pain and loss. Certainly women bull riders are rare, and Kris might not even be that good, but it gives her a better chance than the one she has the danger of falling into. Abe begins to soften a bit, as he is slow to realize that he just can't get in the ring anymore, and the women in his life (old and new) are the ones who might save him.

Luckily, Silverstein does not veer into sacharrine territory; this is not a 'friendship' that will last a lifetime, but a long moment for them both, finding a commeraderie. Their worlds have some overlap, but not all. This is south Texas, and casual racism barely hides beneath a thin veneer, and if she can't out of a cycle, Kris will end up a drug dealer or prostitute, if not in prison. If he can't work at the rodeo, Abe doesn't have anything. Silverstein and cinematographer Shabier Kirchner strip away all artifice: there is no one beautiful or redemptive here, and no one's live is miraculously cured of all problems. The focus on the Black side of the rodeos (as popular culture conveniently forgets, many cowboys were/are Black) gives a different spin on this particular culture often whitewashed or shown as 'hillbilly'.

Both Morgan and Havard (who was discovered in an open casting call) give terrific performances. Likely we cannot directly understand either experience, but they give us hints through their glances and gestures, the way that people in these places too often must hide their vulnerability in order to survive. They are, in their own way, questioning the 'why' of their lives: for Kris, as a child, this is natural; her newfound love for something bigger than herself, and her chance to become part of a real community, leaves her not only to question her life before, but even when she makes mistakes, questions why she is forced to pay in certain ways. For Abe, the why might be mroe of a resignation; he made his choice to follow his heart around the rodeo, and now it's costing him his future.

Bull doesn't seek to solve its characters' problems, nor does it suggest that, even though they have found some hope, that everything is going to be all right in the future (far from it). Silverstein gives us a window onto the lives of people passed over in America, who nonetheless manage to find glimmers of joy, even as they fight against those who would bring them down.

Bull will be released by Samuel Goldwyn Films on digital/VOD on May 1st.