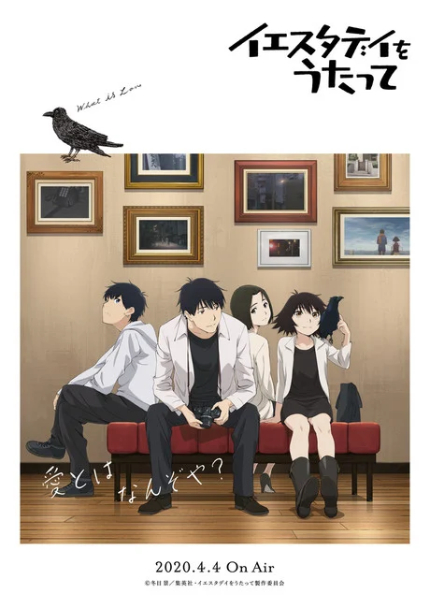 Slackers: you can't live with 'em, so how do you make an anime series about 'em?

Having graduated from college six months before, our young hero, Uozumi Rikao, is firmly rooted in doing nothing.

He works part-time as a convenience store clerk, but without any interest in what he's doing. Nor do his fellow clerks or his customers hold any interest. He just mopes. Somehow, he graduated from college, even though he apparently slept through many of his courses. Upon graduation, he didn't search for any jobs; instead, he remained as a part-time clerk.

He is not suicidal, but he appears ready to die from boredom. Then, for reasons that are entirely unfathomable, a happy and enthusiastic young woman, Haru, begins patronizing the store, complete with a crow perched on her shoulder, and paying him undue attention. That makes our Uozumi uncomfortable, especially when his former college crush Shinanako also shows up unexpectedly, having returned to the area as an elementary school teacher. Where could this possibly go?

Before I answer that, I'd need to wake up.

Only joking, but the show does seem intent on inducing utter irritation with its "hero" and his meandering thoughts. On the plus side, the backgrounds are nicely detailed and colorfully animated. But, as has been sometimes remarked about stage musicals, you can't sing the scenery, you need good songs.

On the side of potential, the series is based on a manga series by Toume Kei that ran from 1997 to 2015. Perhaps the characters will become more appealing with greater variety in their personalities than what is even hinted at in the first episode. And even though I'm kinda slamming the show, I can't help but hope that the kid snaps out of his slackerhood and becomes a fully-functioning human being within the next couple of episodes.

Or, that the show's emphasis switches to exploring all the crows that keep popping up.