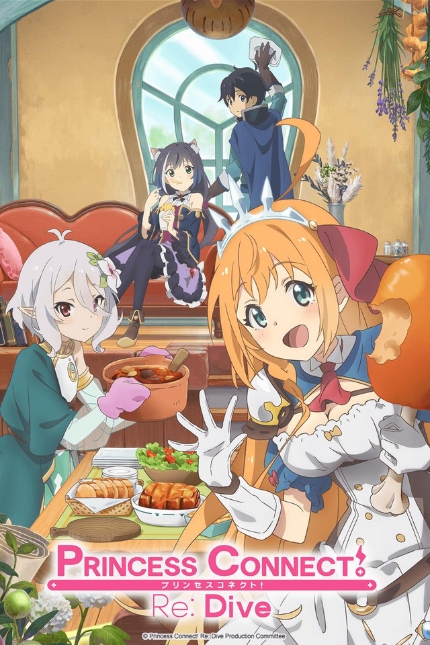 Princess Connect! Re:Dive
Now streaming on Crunchyroll and VRV. New episodes will be simulcast every Monday.

Principally, I'm a live-action narrative genre-movie nerd, with a special interest in animated movies, film noir, 70s cinema, 80s action blockbusters, and all types of indie and independent fare. Over the past year or so, my attention has been persistently arrested by anime shows, which I consistently endeavor to place into context amidst all the other films and TV series that I watch.

And then there's Princess Connect! Re:Dive, which makes little to no sense to me at all, yet still stubbornly compels me to understand its appeal.

Unlike, say, Digimon Adventure, a show that I know already has a huge, built-in audience due to its past incarnations -- which means I'd heard of the franchise before and wanted to investigate further -- Princess Connect! Re:Dive is based on a "role-playing video game developed by Cygames," released in 2018.

Before knowing that, I sampled the first episode, which, like Digimon Adventure, is filled with primary colors and furious action and people who bark at each other. Even more than that other series, though, Princess Connect! Re:Dive is presented with incredibly beautiful backgrounds that made my jaw drop (if such a thing were actually possible nowadays for my aged body).

All this rumination on my part made me realize that I was unduly harsh to Digimon Adventure. Some shows, clearly, are not my cup of tea. Of the shows in the past three anime seasons that I've watched in their entirety, it's always the characters who take precedence in their storylines that win me over. What does the synopsis say about this show? Per Crunchyroll:

"In the beautiful land of Astraea where a gentle breeze blows, a young man named Yuuki awakens with no memory of his past. There he encounters a guide who has sworn to care for him -- Kokkoro, a lovely swordswoman who's always feeling peckish -- Pecorine, and a cat-eared sorceress with a prickly attitude -- Karyl. Led by fate, these four come together to form the 'Gourmet Guild.' And so their adventure begins..."

In this case, the characters have potential to develop in something resembling human beings, so the show does have that working in its favor. Perhaps if the jumbled narrative begins to cohere more concisely, rather than jumping around without much apparent reason, it will win my eternal devotion.

Even with these reservations, I'm adding Princess Connect! Re:Dive to my watchlist, with a yellow 'caution' sign attached.