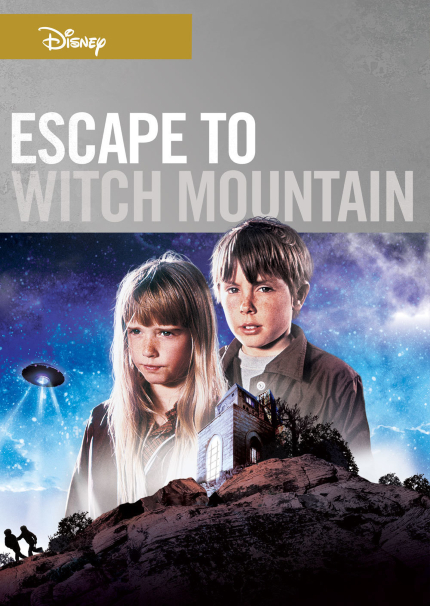 "We've got to get out of here, before it's too late, please."

When it was released theatrically in 1975, and up until recently, I avoided the movie, entirely because of its title.

Then and now, I'm not normally attracted to films about the supernatural. (Mostly because of personal beliefs, but also because the banshees in Disney's Darby O'Gill and the Little People scared the wits out of me when I saw it as a child during a theatrical re-release in the mid-60s. Never again, I resolved!)

As I recently became aware, however ...

... Escape to Witch Mountain is not really about witches and such.

Based on a novel by Alexander Key, first published in 1968, Escape to Witch Mountain revolves around two young orphans whose adoptive parents have recently died. Tony (Ike Eisenmann) and Tia (Kim Richards) arrive at an orphanage, guarding secrets about their hidden powers of psychokinetics and telepathy, respectively.

When local millionaire Aristotle Bolt (Ray Milland) becomes aware of their gifts, he attempts to bribe them into revealing their powers for his own nefarious benefit, with the assistance of his accomplice, evil lawyer Lucas Deranian (Donald Pleasance). The children are smarter than that, though, and soon make their escape.

They encounter widower Jason O'Day (Eddie Albert), who is traveling through the country in his recreational vehicle (RV). They hide out in the RV, and soon befriend the grumpy older man, who in turn seeks to protect them from the evil millionaire.

Reportedly, director John Hough was picked for the project on the strength of the frightfully fun The Legend of Hell House (1973). He also helmed Twins of Evil (1971) and, for contrast, Dirty Mary Crazy Larry (1974), a road movie that I've always loved (and not just for the title).

Adapted by Robert M. Young, a veteran television scribe, the script covers all the bases for a Disney family film -- adorable orphans, meddlesome adults, lovable animals -- but is a good deal more than that might suggest. Hough keeps things moving along, and having Milland, Pleasance, and Albert on hand gives the story the weight it needs to keep the film from floating away, like an upside-down helicopter.

Do you feel this content is inappropriate or infringes upon your rights? Click here to report it, or see our DMCA policy.
DisneyPlusDonald PleasanceIke EisenmannJohn HoughJohn Hough directed the family filmKim Richardsnow on Disney+; Eddie AlbertRay Milland