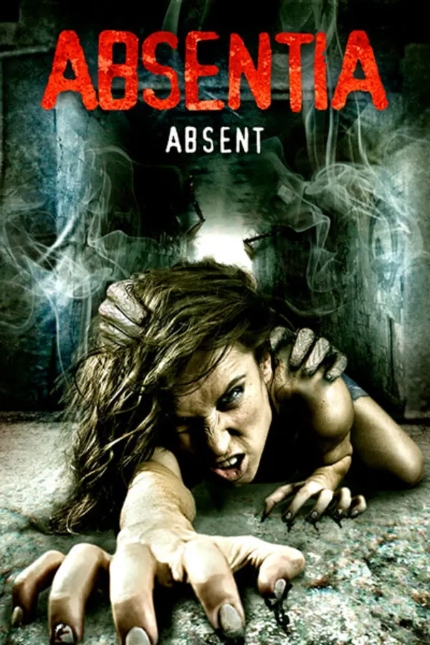 If you believed the hype leading up to a screening of Mike Flanagan's festival hit Absentia back in 2011, we all went into it thinking we were going to get the scare of a lifetime. That didn't happen.
What we got, though, was a finely written and acted family drama, laced with creepy and well executed supernatural horror. There were a couple decent jump scenes; most will agree the door scare was especially effective. But, either by restrictions in budget or by conscious effort, Flanagan keeps the supernatural chills lurking in background, on the peripheral, and in the dark. So while Absentia did not come as advertised it is still an effective and creepy supernatural horror.
Here's the official synopsis:
It takes seven years without contact before someone can be legally declared dead "in absentia". Tricia has held onto the hope that her husband would return after vanishing with a trace, but the time has come to move on with her life. Her younger sister Callie, facing demons of her own as a recovering addict, has moved in to help her sister with this transition, but instead discovers an ominous tunnel nearby that may have a connection to a number of other disappearances in the area, and perhaps an otherworldly force at work.
The interaction between Tricia and Callie feels natural and convincing; Courtney Bell and Katie Parker have a believable chemistry on film. This is key because so much of Flanagan's script relies on their relationship. There are only a couple weak points in the script, specifically when the sister, Callie, starts to put pieces of the puzzle together about events in the area and it turns into an episode of Fringe, but these moments are ever so brief.
You also get a chilling cameo by perennial fan favorite Doug Jones. I would have thought that having a recognizable actor in any role in this film might have unhinged the flow as horror fans would stop to recognize him. But his role is the transition point from which Absentia transcends from the ghost story into the creepy tunnel story. And he does the gaunt freaky limb guy so well.
Director Mike Flanagan has quite the little horror gem in his hands here. His small budget indie horror film quietly builds tension with a couple scares but stays away from outright displays of horror.
Perhaps he understands that less is more in this instance. Sound also plays a big part in his film as well. The chatter in the tunnel, the barely audible mutterings of her husband's ghost, or the complete absence of any sound at all help create palatable tension.
Absentia, in its modesty is when it is most effective. The right use of sight and sound, and the lack thereof, are only to its benefit. If it had tried to explain too much it could have been a failure.

Review originally published in slightly different form during the Toronto After Dark Film Festival in October 2011. The film is now streaming on Shudder.

Do you feel this content is inappropriate or infringes upon your rights? Click here to report it, or see our DMCA policy.
Dave LevineKatie BellKatie ParkerMike FlanaganShudderUS