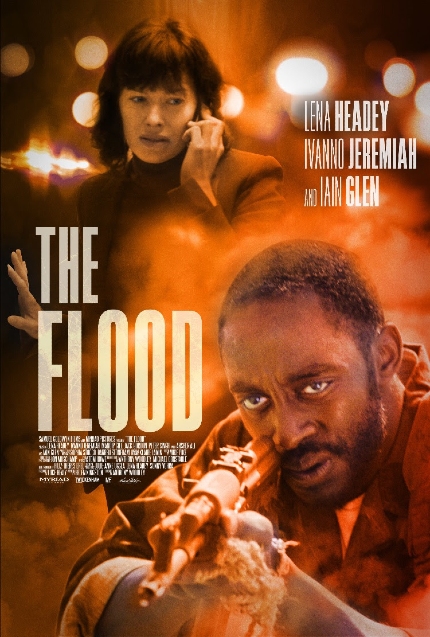 I live in Texas, where most immigrants arrive by air or land, but I can readily understand why some people might refer to the tidal wave of desperate emigrants seeking a safer harbor away from their homeland as The Flood, which is the title of a new British dramatic thriller.

In the case of Wendy, portrayed by Lena Headey, she is an immigration officer in the UK who eagerly grabs the opportunity to investigate a high-profile case. The official synopsis describes her as a "hardened" officer, and I suppose it's rather challenging for anyone who works in immigration to maintain a level-head and evaluate things fairly and properly without becoming a bit "hardened."

The synopsis also says she's been given the high-profile opportunity because of "her ability to quickly and clinically reject applicants." Again, that sets us up for an unflinching look at a system from the inside.

Here's the case: "Through her interrogation, she must uncover whether Haile (Ivanno Jeremiah) has a sinister reason for seeking asylum." Haile is a person of color, so as often occurs in immigration systems dominated by people without color, he is inherently suspect.

Now Lena Headey is a very talented actress and I fully expect her to show that there's more to her character than those dispassionate terms used above. She's joined by Iain Glen, a very talented actor who just happened to also appear in Game of Thrones, a series about dragons and blood and naked people and such.

I don't expect to see dragons and naked people in The Flood, but I won't be surprised if blood shows up on screen. These are, after all, very perilous and often violent times in which we live, especially with so many desperate people seeking to survive.

And though I'm less familiar with Ivanno Jeremiah, he brings a welcome, two-edged presence to his scenes in the trailer -- is he a hero or a villain?

Anthony Woodley directed from an original screenplay by Helen Kingston. The Flood will be releasing on May 1 from Samuel Goldwyn Films. Check out the tense trailer below.