DRIVEWAYS Trailer: Reflections on What Separates Us 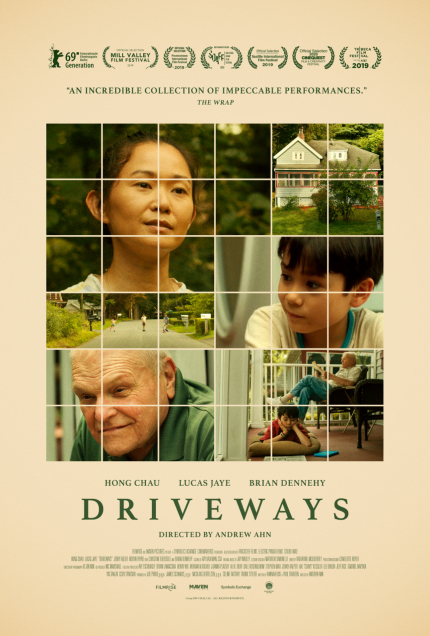 What separates us from one another? In apartment buildings, it's walls. In smaller towns across the U.S., it's driveways that divide one home from the next.

Directed by Andrew Ahn (Spa Night), the latest trailer for Driveways acknowledges and/or suggests other common, dividing factors: race, age, apprehension of a stranger. The film follows "Kathy (Hong Chau), a single mom who comes to a new town with her young son in tow; her son quickly bonds with their neighbor, Del (the late Brian Dennehy in one of his final roles) and the three form an unlikely family unit."

The official synopsis only hints at the gentle kindness that emanates from the screen during the trailer's few brief minutes of running time. Dennehy, who passed away on April 15, 2020, first came to wide attention in First Blood (1982), where he established a craggy, stern demeanor, which imprinted itself onto my brain whenever I saw him after that. He was always a voice of reason and passion, and it's always been a pleasure to watch him (not) work, in whatever role he inhabited.

Driveways heads to various VOD platforms and will be available to stream or download -- iTunes, Prime Video, GooglePlay, Microsoft, Satellite and Cable On-Demand Providers -- on Friday, May 7. Watch the trailer below.

Do you feel this content is inappropriate or infringes upon your rights? Click here to report it, or see our DMCA policy.
Andrew AhnBrian DennhyFilmRiseHong ChauUS