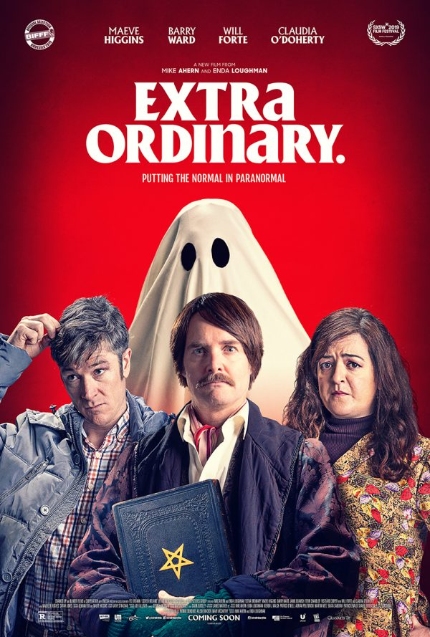 A psychic driving instructor fights to save a young girl from a satanic sacrifice at the hands of a washed up psychedelic rock star in directors Enda Loughman & Mike Ahern's Extra Ordinary.

This dark comic fantasy from Ireland absolutely wrecked the SXSW audience [last year], who I don't think were quite prepared for the potent mix of broad splatstick comedy and the sweet coming-of-age story of a thirty something woman looking for meaning beyond teaching teenagers to parallel park.

Rose (Maeve Higgins) is that driving instructor, but with a not-so-secret past. Rosa's father was the UK's premiere paranormal expert, hosting a popular series of informational specials on various aspects of the intersection between the worlds of the living and the dead. Rosa inherited her father's ESP, referred to here as "The Talents", but following a tragic accident that left her orphaned, she's abandoned the life to take a safer path. But just because she left all that behind, doesn't mean that the netherworld is done with her.

Nearby, the nebbish Martin Martin (Barry Ward, The End of the F***ing World) attempts to deal with his overbearing wife telling him what to do with every moment of his life. The real problem for him though, is that she's been dead for years. Encouraged by his snarky daughter Sarah (Emma Coleman) to take his life back, Martin gets in touch with Rose to try to exorcise his literal demons, but he ends up getting more than he bargained for.

Meanwhile, within a local castle dwells a prog rock one hit wonder named Christian Winter, played to the ridiculous hilt by Will Forte. Winter is on the verge of losing everything, including his mind thanks to his insanely self-centered wife Claudia, portrayed in a scenery chewing masterclass by Claudia O'Doherty from Netflix's Love. Winter has plans to climb out of his hole, though, and they involved satanic incantations, virgin sacrifices, and lots of mugging for the camera.

When this trio of losers cross paths, Martin and Rose must band together to prevent Christian from accomplishing his devilish goals, which leads to one hilarious paranormal spectacle after another. Writer/director Ahern pitches the comedy just right and makes this ridiculous story idea work through careful characterization, great pacing, and some really solid gags. It's the little touches that make Extra Ordinary so good, and those touches are everywhere.

At its core, Extra Ordinary is a paranormal adventure story very tightly contained to a few central characters, but focusing tightly on these characters allows the leads to really stretch and deliver incredibly endearing performances in the face of ridiculous circumstances. Higgins in particular takes advantage of every scene she's in - which is nearly all of them - to deliver little bits of business that really define her character in ways that feel very familiar and relatable. Her performance plays against the nonsense and bombast brought by Forte in a way that serves to further enhance her role as the underdog in this race to save not only the soul of a young girl, but also self-realization for Rose, who’s been stumbling through life since her father passed away.

Extra Ordinary delivers lots of well-earned laughs through a combination of visual gags, bits of character business, and well-defined personalities in constant but endearing conflict. This is the kind of film that works really well with an audience, as my boisterous SXSW crowd would attest to, but will probably do equally well with a streaming service, which is where it will likely land in the next few months. One of my favorite films of the festival so far, Extra Ordinary delivers ooh's and aww's in equal measure, and I love it for that.

Do you feel this content is inappropriate or infringes upon your rights? Click here to report it, or see our DMCA policy.
Barry WardEnda LoughmanIrelandMaeve HigginsMike AhernWill Forte