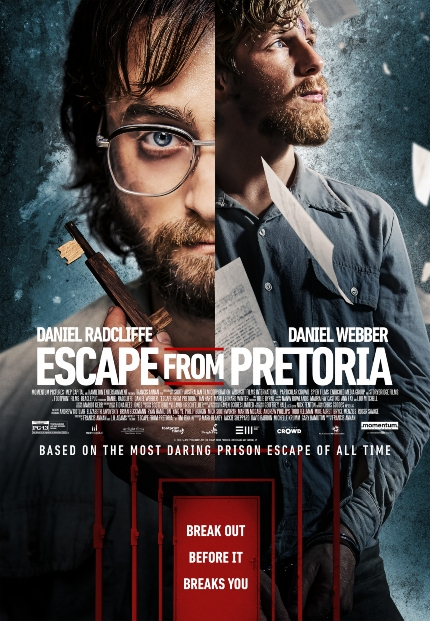 Everyone in South Africa suffered from apartheid.

Escape From Pretoria
The film opens in select theaters, On Demand and Digital on Friday, March 6 via Momentum Pictures.

In 1979, Clint Eastwood starred in Don Siegel's Escape From Alcatraz, a tough and taut true story about a bank robber who broke out of the infamous island prison along with two other criminals. The trio then disappeared.

In that same year, Tim Jenkin and his friend Stephen Lee were imprisoned in South Africa for the crime of distributing literature in protest of the government's apartheid policy. Determined to escape their unjust sentences, so as to continue their protests, the two men joined forces with fellow prisoner Alex Moumbaris on a meticulous mission to break out of the seemingly impregnable, whites-only penal facility.

Based on Tim Jenkin's real-life account, Escape From Pretoria is more a fact-based procedural than a thriller, focusing nearly entirely on Jenkin's period of confinement as he plots an escape. The film skips over the opening pages of Jenkin's book, which details how he, a white South African, gradually opened his eyes to the situation in his native land, reexamined his personal beliefs, and was then stirred to become an activist.

Without that clear-eyed motivation as a setup for the events that follow, the film is left to its own devices, and the assumptions of a potential viewer, to drum up and maintain interest in the proceedings. As adapted by L.H. Adams and Francis Annan, Escape From Pretoria leans heavily upon the idea that viewers already know (and agree) that the South African government's policies were outrageously nasty, intolerant, racist, and so forth and so on.

To some extent, the prison guards carry this burden, personifying the government's treatment of its people. They rule with an iron hand and brute force, stomping down hard on any who dared to protest.

Daniel Radcliffe has an innately likable personality, and he is immensely admirable as the dedicated, determined Tim Jenkin, while Ian Hart provides a rooted presence as long-suffering fellow prisoner Denis Goldberg.

Summing up: Director Francis Annan delivers a very solidly-crafted film that is admirable for its intentions.