Rendez-Vous with French Cinema returns in March with another edition that exemplifies the variety and vitality of contemporary French filmmaking. The films on display, by emerging talents and established masters, raise ideas both topical and eternal, and take audiences to entirely unexpected places. Co-presented with UniFrance, the 25th edition of Rendez-Vous will demonstrate that the landscape of French cinema is as fertile, inspiring, and distinct as ever.

This year, the festival opens with Kore-eda Hirokazu's TheTruth (coming out in theaters on March 20), starring Catherine Deneuve and Juliette Binoche as mother and daughter in a family drama. It also showcases new films from Bruno Dumont, Christophe Honoré, Cedrick Klapisch and legendary director Claude Lelouch. Below are some of the films I was able to sample.

The festival runs from Friday, March 5 through March 15 at Film at Lincoln Center. Expect some interviews from me as well throughout the festival. 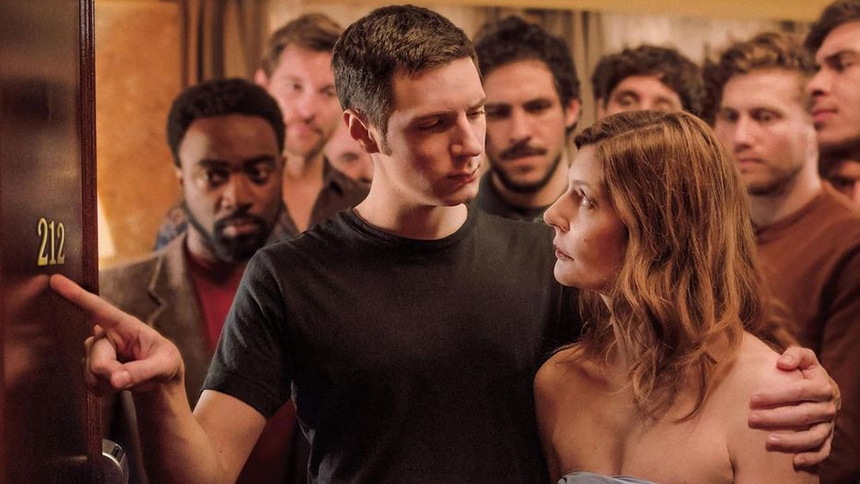 On a Magical Night/Chambre 212 - Christophe Honoré

Maria (Chiara Mastroianni) is a law professor who sleeps around with her younger pupils, even though Richard (Benjamin Biolay, a French singer/music producer who is a Benicio Del Toro doppelgänger), her husband of 25 years, is a good man. She just woke up in bed with one of her student named Asdrubal Electorat, just because his name aroused her. Richard finds out the affair by seeing her busy chat app on the phone. Avoiding the confrontation, Maria goes over to a hotel next street to stay the night.

There she is visited by several people from her past, including young Richard (Vincent Lacoste), his first love/piano teacher Irene(Camille Cottin), her Charles Aznavour-like own will (Stéphane Roger) and dozen of her former lovers over the years.

In true Honoré fashion, On a Magical Night is a musical fantasy steeped in whimsical comedies of old Hollywood and his love for cinema: the setting is snowy winter Paris, Maria and Richard live above a movie theater, piano singalong serves as reconnecting with one's past, obvious studio set mise-en-scene, etc.

Honoré's contemplation of memories, love and marriage are delightfully captured by great ensemble cast with his usual muses - Mastroianni and Lacoste). It's a great fun film to get away from the wretched reality. 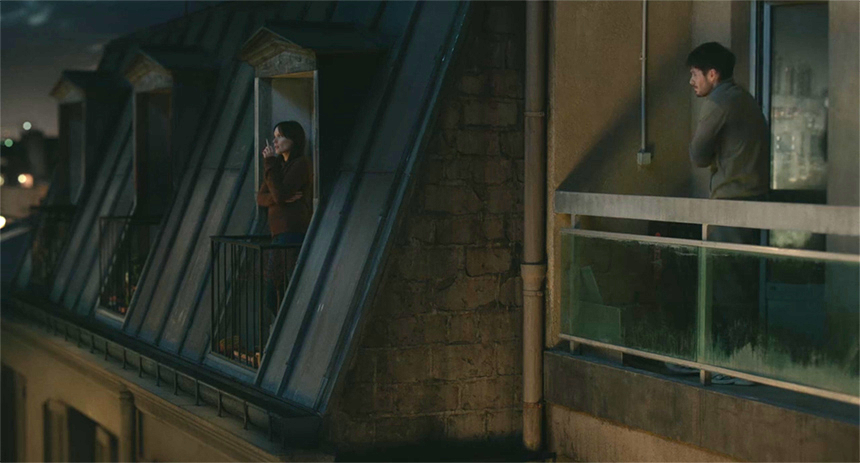 A romantic comedy in the tradition of "there is a perfect match right next door unbeknownst you". Melanie (Ana Girardot) is a medical lab technician who sleeps too much and has a low self-esteem after a long relationship ended. Rémy (François Civil) is an web sales warehouse worker who thinks he is a bad luck around him. They happen to live adjacent buildings on the same level and have never met in real life.

Kalpisch, as usual, paints Paris as a city with clusters of lonely souls trying to connect with each other, sometimes successfully and other times not. With most stretches of film's running time, he makes the case that these two attractive Parisians are made for each other, but only after they work out their kinks, with the help of a pair of psychotherapists.

Someone Somewhere feels a bit like self-help - "you are allowed to love yourself" movie, but the characters are very affable and relatable. Girardot and Civil are very good so as large supporting characters (notably Camille Cottin and François Berléand as psychotherapists, Pierre Niney as old friend reconnected through social network, and Paul Hamy as a failed tinder date).

On an intellectual level, I understand what Dumont, the famed auteur of French cinema, heir to the Bressonian minimalist tradition, is doing with Joan of Arc franchise (if you will), but that doesn't necessarily make it an enjoyable movie going experience. After Jeannette: The Childhood of Joan of Arc; a headbanger's ball that was part musical, part comedy of manners, part historical retelling of a young French maid who believed that she was god's messenger to take up arms and lead the French army to rid of English invasion, Dumont continues to tell the other half of the story, faithfully following Charles Péguy's rhythmic prose from three part poem/play, which tells Joan's defeat and trial and burning at the stake.

With minimal settings and mostly non-professional actors, Dumont examines Joan (played by Lise Leplat Prudhomme, a ten year old girl who played the character in the first film and not Jeanne Voisin who replaced her as a teen Joan in the same film - I mean, why bother with logic?), as she struggles to answer her accusers of heresy. She doesn't hear the voice that was guiding her to the battle anymore. Does she still keep her faith or admit that god might have abandoned her?

The tragic beauty of the story of Joan has always been her inner struggle and her unwavering faith in the face of torture and death. Even though Prudhomme does an amiable job and Dumont makes a point of using a child instead of a grown woman (Joan was 19 when she died), as innocent victim of sexism and hypocracy of the church. But it doesn't make a compelling experience to watch as clergies dryly argue over Joan's fate while the child screams on top of her lungs, "It is none of your concern!" over and over. 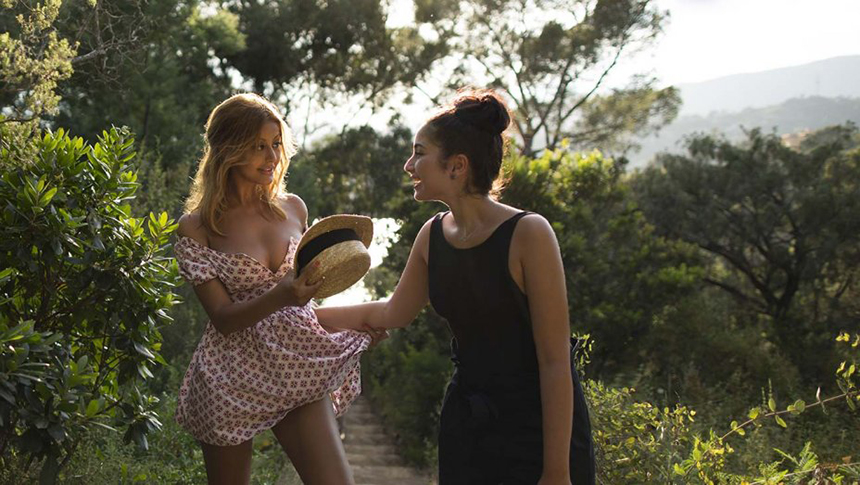 Set in sun-kissed Cannes in summer, An Easy Girl is an astutely observed coming of age story in the material world we are living in. Writer/director Rebecca Zlotowski expertly balances the film from slipping into a typical 'rich older man meets young girl for sexual favors' tale. The film examines the youth in the age of social media and unfettered consumerism and tells that there is more to what meets the eye.

It's the start of a summer break and Naima (Mina Farid) has just turned 16. Still aimless and unsure of her self, she looks up to her newly arrived cousin from Paris, Sophia (Zahia Dehar, a French tabloid sensation cum model/designer). Sophia knows how to command her beauty and use it on men to support her extravagant tastes. She tells her young cousin it's not love but sensations she is after. Sophia catches the eyes of Andres (Nino Lopez), an extremely wealthy art collector who's yacht is docked in the harbor. The girls are then invited on board for soirée under the watchful eye of Philippe (Benoit Magimel), his assistant.

Even though Naima is clearly uncomfortable with her glitzy, guilded surroundings, a glimpse and a taste into the rich and famous is too tempting. But she knows that being free is not just having a lot of money. And it's quiet, withdrawn Philippe who she feels a sort of kinship with.

Discovering and finding value in oneself is what she learns in the course of the hot summer of fun. Farid is pitch perfect for the role of a girl who is still searching for herself and her place in the universe with natural, subtle acting and Dehar is also very effective playing hedonistic, detached young woman who floats through life. 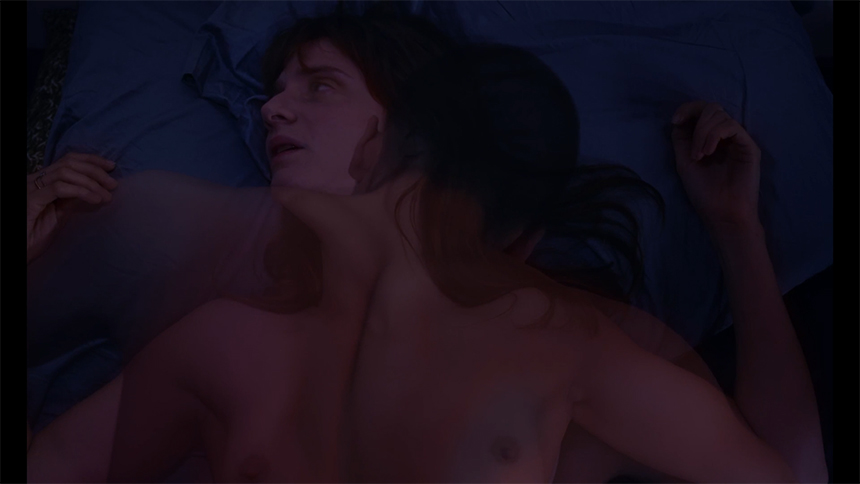 Burning Ghost is a paranormal love story that falls between Ghost/Sixth Sense and Afterlife. Juste (Thimotée Robart) is a young man who serves as a gentle guide for recently departed souls to the afterlife, under the order of bureaucratic grim reaper Kramarz (Saadia Bentaïeb). He is invisible to everyone except his colleagues and freshly departed. His idling purgatory is disrupted when Agathe (Mikael Hers regular, Judith Chemla) recognizes him and obviously can see him on the street and follows him. Ten years ago, they met in Turkey and Agathe never forgot about her first love. Now she finds him not aged at all. They fall in love all over again. But because of the laws of the afterlife that mortals are not privy of, Juste becomes invisible to Agathe, and only can appear in her dream.

Do you feel this content is inappropriate or infringes upon your rights? Click here to report it, or see our DMCA policy.
FranceRendez-vous with French Cinema