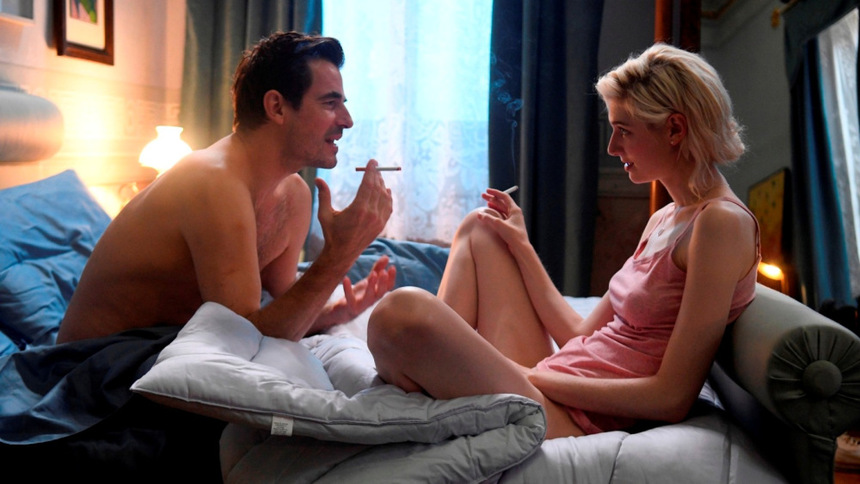 Critics of any art form can suffer from the opposing forces of Imposter Syndrome and the Dunning-Kruger effect. On one hand, we're never quite sure if we know what we're talking about it (and certainly main would agree); on the other, we can become so convinced we are unaware of our own ignorance. Arguably this most comes into play in visual art; most people would fall into the 'I may not know much about art but I know what I like' category, and certainly what is deemed a masterpiece, being determined by experts, might leave many people scratching their heads. And so much depends on the fame of the artist, as oppose to any particular quality of the actual work.

The Burnt Orange Heresy, directed by Guiseppe Capotondi, with a terrific (and terrifically sexy) cast of Claes Bang, Elizabeth Debicki, Mick Jagger, and Donald Sutherland, this Hitchcock-esque thriller of the art world makes a great exploration of the lies we tell, the identities we present and the ones we hide, and the power of money. While it loses its grip in the third act, it is nonethless a fun caper, a play on ego, ambition and desperation that slowly burns while you enjoy the sumptuous scenery and wordplay.

Claes Bang (The Square) plays James Figueras, a somewhat disgraced art critic and curator, who delivers lectures to tourists in which he shows them behind the deceptive curtain on how people such as him can convince the public of a piece of art's worth. He meets Berenice Hollis (Elizabeth Debicki, Widows), a traveling American, and they quickly enjoy a lustful tryst. James has been invited to the Lake Cumo estate of wealthy art collector Joseph Cassidy (Mick Jagger); James thinks this is to assess his collection, but Cassidy has something else in mind. He is also hosting reclusive artist Jerome Debney (Donald Sutherland), whose work has not been seen for decades. Cassidy offers James a chance to interview the elusive man (which would give James his career back) on one condition: steal one of Debney's paintings.

Though he makes his living by 'performing' his expertise, James is the one least able to lie about himself and his wants; Cassidy knows where his weaknesses are, Debney makes him work for an interview, and though Berenice can see right through him (in both the negative and positive), she still enjors his company (and the free trip to a gorgeous Italian lake). Cassidy, by virtue of his wealth, has no need to hide anything; any indiscretion can be solved by money. Debicki's character is teased out to more interest: we have no idea who she is, or even if what little she divulges is the truth. Debney has no time for fools, but he knows on which side his bread is buttered and plays along to satisfy his host (though only he knows how shocked they will be when they discover his little secret).

Adapted from the 1971 novel by Charles Willeford and adapted by Scott B. Smith, this is a story of two people with more ambition and/or money than sense or caring, and two who have nothing to hide, but choose to do so for their own private reasons. James, a frustrated artist and stunted curator, is angry at a world that he sees as owing him the fame and wealth he thinks he deserves, simply because he wants it. Pairing this with Berenice's discretion desire just to exist in this affair for a time, and it makes for an interesting attraction and rising anger.

Bang and Debicki have terrific chemistry; set against the Lake Cuomo backdrop, which cinematographer David Ungaro shoots in both its grandeur and intimacy with shades of the sinister, their affair and the impending crime make for delicious fodder. As soon as Debney enters, Smith infuses the dialogue with poetry; Debney knows what his standing is, and has no need or interest in small talk. The riddles in which he speaks, and by which he forces James to indulge him in order to gain access, give way to a closeness he feels with Berenice, the one person who wants nothing from him but his company.

But just as the thriller reaches its fascinating climax, it falls apart. This is mainly due to how badly the character of Berenice is handled; while I expect this is a result of the source material, it is nonetheless frustrating to see a dull stereotype of a woman character treated, in the end, as nothing more than a piece of furniture for the other characters. This is no fault of Debicki, who gives a great performance, but her character's decisions make no sense and adds to an ending that falls with a thud when you're already walking away.

With a good set-up, great performances, a gorgeous backdrop, and a subtle yet haunting score, The Burnt Orange Heresy is two-thirds of a great mid-budget thriller that is too often neglected in contemporary cinema. It's too bad that the ending lets the story down.